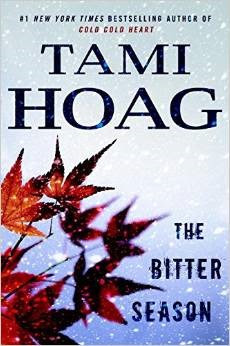 It's Friday!  I had to get up early today so I could get our air conditioning checked out.  I have learned to get it done early before it gets extremely hot (I do not want it breaking down in the summer).  Today's review was supposed to have been done in January.  Somehow it got lost in the shuffle (I have had a lot going on the last few months).  Today is Worship of Tools Day!  I know my father loved his tools (especially the Dewalt ones).  Mary Shelley's Frankenstein was published on March 11 in 1818.  It is considered the first science fiction novel.  Mary Shelley was just 21 when this novel was published.  Fox's show Cops premiered on this day in 1989.  This started an unending reality television show craze (makes me want to go back and maim that producer).  My father loved this show (I did not see the appeal).  England's first daily newspaper The Daily Courant began publication in 1702.

The Bitter Season by Tami Hoag is the latest Kovac and Liska novel.  Liska has transferred to the new Cold Case Unit (funded with a half a million-dollar grant) in Minneapolis, Minnesota to have regular hours and spend more time with her two sons.  After going through hundreds of files the new unit meets to discuss their first case.  Gene Grider (a retired detective) has come back to the cold case unit with an agenda.  He wants the first case they work on to be the Ted Duffy case.  Ted Duffy was an officer who was killed on the job twenty-five years previously.  Grider is very determined (and a misogynist).  The boss decides it will be the first case, but Liska will work it (a new set of eyes and since Grider did not solve it the first time around).  Grider is not thrilled and goes out of his way to make things difficult for Nikki Liska.

Sam Kovac misses his old partner, Nikki Liska.  Kovac is on his third partner in three months.  His latest is Michael Taylor (a fledgling homicide detective).  Kovac’s latest case is the death of Dr. Lucien Chamberlain and his wife.  They were murdered (in a gruesome fashion) with a Japanese sword from Dr. Chamberlain’s collection.  Who wanted to kill this professor and his wife?

Nikki Liska dives into her case.  However, it seems like the Duffy family does not seem to really want the case solved.  No one will answer questions.  Liska is relentless in her pursuit of closing this case especially when she discovers that her case and Kovac’s are connected.  Someone is not telling the truth.  Liska and Kovac will have to work through the secrets and lies to reveal the killer.

The other books in the Sam Kovac and Nikki Liska series are Ashes to Ashes, Dust to Dust, Prior Bad Acts, The 9th Girl, and The 1st Victim.  I received a complimentary copy of The Bitter Season from NetGalley in exchange for an honest evaluation of the book.

I hope all of you have a fantastic Friday.  I am off to put the cats new cat tree together.  We got them one with a lot of tiers, toys, and tunnels.  I am currently reading At the Edge of the Orchard by Tracy Chevalier.  Take care and Happy Reading!