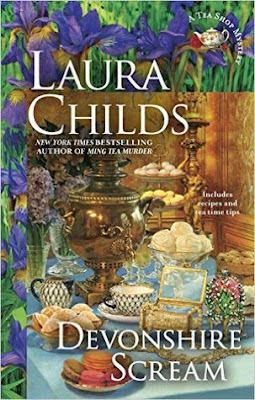 Happy Plant a Flower Day!  Today is a good day to work in the garden and put in some new plants.  I am putting little mini roses out front.  Spider plants and mini roses are the only thing that will grow in my front bed (it gets a lot of direct sun).  On March 12 in 1994 the Church of England ordained its first women priests (about time), in 1894 Coca-Cola is bottled and sold for the first time in Vicksburg, Mississippi by local soda fountain operator Joseph Biedenharn, and President Franklin D. Roosevelt holds his first fireside chat in 1933.

Devonshire Scream by Laura Childs is the seventeenth book in A Tea Shop Mystery series.  Theodosia Browning (aka Theo) owns the Indigo Tea Shop in Charleston, South Carolina.  Theo is attending the Jewelry Extravaganza hosted by Brooke Carter Crockett at Heart’s Desire.  It is a showcase of beautiful jewelry from the previous century (from Cartier, Bulgari, Tiffany).  Everyone is having a lovely evening until an SUV drives right through the front window and masked robbers pop out of the vehicle.  They do a two-minute smash and grab and take off.  They leave behind destruction and death.  Brooke’s nice, Kaitlin is dead from the flying glass.  The security was so tight at the event that this was the only way the robbers could have made it in, and they knew how long it would take the police to arrive.  Brooke is devastated by the loss of her niece, and she asks Theo to solve the crime.  Brooke wants to know who killed her niece (she is less concerned about the jewels).  Drayton Conneley (Theo’s tea master and friend) is worried the robbers will attack the Heritage Society Rare Antiquities show where they are featuring a Faberge egg.  Theo sets out to find the bandits before they can strike again.

Devonshire Scream was the bee’s knees!  I found Devonshire Scream engaging and pleasing to read (I did not want to put it down).  It is a complicated mystery (my favorite type) that was enjoyable to solve.  The mystery had multiple suspects that will leave the reader guessing (unless you are good at solving mysteries). The book contained great characters, and I enjoyed the banter between Theo and Drayton.  We get to reconnect with all of our favorites (Drayton, Haley, Delanie Dish, Earl Grey, and Burt Tidwell).  You do not have to have enjoyed the previous books in the series to read Devonshire Scream (though you will want to read all of them).  This is one of the series that got me started on cozy mysteries.  I discovered the first book in my local bookstore and proceeded to read all the books that were out at the time (before e-readers).  I give Devonshire Scream 5 out of 5 stars.  The book contains delightful descriptions of the tea treats that are served at the Indigo Tea Shop.  There is also a recipe for Drayton’s delicious Devonshire cream in the book!  I cannot wait for the next book in A Tea Shop Mystery series!

You can see the other sixteen books in A Tea Shop Mystery series on Amazon.  I received a complimentary copy of Devonshire Scream from NetGalley in exchange for an honest review of the novel.

I hope everyone has had a satisfying and enjoyable Saturday. I took it easy today (I was in so much pain that I could hardly move). Hopefully, I will be back up to par tomorrow!  Take care and Happy Reading!

Posted by Kris Anderson, The Avid Reader at 6:59 PM