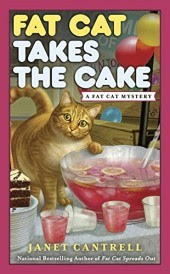 Happy Friday.  The week passed by so quickly.  I am working on a project for my new bedroom.  I wanted a unique entertainment center.  So I have purchased nine crates (about 16 inches long and five inches wide).  I am going to sand, stain, and hook them together.  I will then put a wood top on it.  It is just perfect.  It will hold the television as well as many books.  Did you know that on March 8 . . . the Venus de Milo was discovered in a cave on the Aegean Island of Milon in 1820 (can you imagine this beautiful statue in a cave), Grace Hopper creates COBOL programing language in 1959, in 1904 Longacre Square in Midtown Manhattan is renamed Times Square after The New York Times!

Fat Cat Takes the Cake by Janet Cantrell is the third book in the Fat Cat Mystery series.  It is three weeks until Christmas and Anna Larson’s wedding.  Anna and Chase Oliver are partners in Bar None (a dessert bar shop) in Minneapolis, MN.  They are in the kitchen of the shop when Anna receives an invitation to participate in the Minny Batter Battle.  Anna had not received an invitation since its inception.  Anna immediately starts thinking about what she will create (and how to beat Grace Pilsen, owner of The Pilsener—a bakery).  Chase gets notice that her graduating class from Hammond High School will having a fourteen-year reunion this month (fourteen years and in December).  It turns out that Richard (Dickie) Byrd is going to run for mayor and the reunion will be the kickoff to his campaign (and it will not cost him a dime).  Chase attends the reunion with her friend, Julie Larson.  Unfortunately, Ron North also attends.  Ron “stalked” Julie in high school (he is also creepy).  Ron has not changed in fourteen years.  The next day Chase is out walking Quincy, her butterscotch tabby cat (for exercise since he has been putting on the pounds) when Quincy finds Ron’s body in some bushes (Quincy seems to have a knack for finding bodies). It seems Ron was strangled with the scarf he took from Julie.   When Julie ends up accused of the murder, Chase sets out to prove her innocence.  Of course, Chase is also a little distracted by Eddie Heath.  They dated in high school until Eddie ended up hurting Chase (it was embarrassing).  They have reconnected and Chase cannot seem to stay away from him (even though she is dating someone else and they do not have anything in common).  Chase had better focus if she wants to clear Julie in time for Anna’s wedding (and Christmas).

Fat Cat Takes the Cake is told in the first person from Chase’s point-of-view.  I enjoyed the tidbits told from Quincy’s view (they were funny).  Fat Cat Takes the Cake is an easy to read novel with fun (engaging) characters.  The mystery was entertaining, but I thought that the killer was extremely obvious (at least to me).  I give Fat Cat Takes the Cake 4 out of 5 stars.  The book can be read alone if you have not enjoyed the previous books in the Fat Cat Mystery series (like me).  The ending is just so sweet.  There are also some leash training tips for cats at the end of the book as well as a recipe.  I look forward to reading the other (and future) books in the Fat Cat Mystery series.

The first two book in the Fat Cat Mystery series at Fat Cat at Large and Fat Cat Spreads Out.  I received a complimentary copy of Fat Cat Takes the Cake from NetGalley (and the kind publisher) in exchange for an honest review.

If you read a book, please take the time to leave a review.  It can be short (just two sentences).  It makes a big difference to an author and their series. Thank you for visiting!  I hope all of you have a fantastic day! Take care and Happy Reading!

Posted by Kris Anderson, The Avid Reader at 3:29 PM