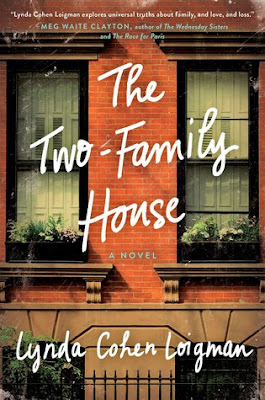 It is Wednesday and we are halfway through another week.  I do not think I will ever finish raking leaves.  I filled five cans (someone stole my other three cans--who steals garbage cans) and it looks like I barely made a dent.  I finish one section of the yard, we get a good wind, and then it looks like I never touched it.  My mother wanted to know if it was really spring with all these leaves falling.  I am beginning to wonder about it! Edgar Allen Poe published the first detective story on April 20 in 1841. The book was The Murders in the Rue Morgue (great story).  Apollo 16 (with John Young in command) landed on the moon in 1972, and in 1916 the Chicago Cubs play their first game in what is now known as Wrigley Field.

The Two-Family House by Lynda Cohen Loigman is the story about two brothers who share a family home.  Mort, Rose, and their daughters live in the downstairs apartment.  Abe, Helen, and their four boys live upstairs.  The two brothers work together at Box Brothers. They make cardboard boxes for businesses.  Helen and Rose end up pregnant at the same time with their babies due in January.  Their children are born during a winter storm in Brooklyn in 1947.  One woman wants a boy and the other a girl.  They have the opportunity to get what they want and take it.  See how this one choice (act) changes their lives and their families.

The Two-Family House is a slow starter.  It is hard to get to keep reading this book, but I persisted.  The novel was okay (satisfactory), but not wonderful.  The story just plods along telling you what happens because of the decision these two women made (and one regrets it).   The characters were flat.  The Two-Family House is told in a first person point-of-view by various characters (which leads to confusion as it switches).  The novel needed a little something (like maybe making it more of a secret) to make it more appealing.  It needed more depth and interest.  It reads more like a first or second draft, than a finished novel.  I give TheTwo-Family House 2 out of 5 stars.

I received a complimentary copy of The Two-Family House from NetGalley in exchange for an honest review.

Thank you for stopping by and checking out my latest book review.  I am off to enjoy my evening.  I want to finish All Murders Final by Sherry Harris.  Take care and Happy Reading!