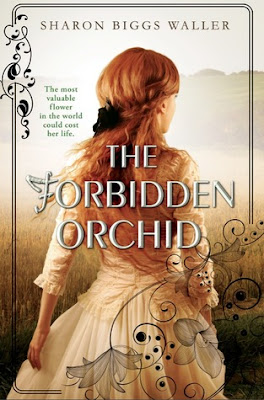 Can you believe it is Friday already?  When I was a kid, the week just seemed to drag by.  Now time goes by so quickly.  I was reading in my room today when I heard yelling.  I investigate to find water pouring all over my mother's bathroom.  She had decided to rinse out her cereal bowl in the bathroom sink (who knows why).  She forgot she had the water running (she got absorbed in her book) and it ran all over.  It is one way to clean the floor!  Did you know . . . in 1923 insulin becomes generally available for use by people with diabetes, General Electric Company is formed in 1892, Jackie Robinson debuts for the Brooklyn Dodgers in 1947 (breaking the baseball color line), and the Bergen-Belsen Concentration Camp is liberated in 1945!

The Forbidden Orchid by Sharon Biggs Waller is a historical romance novel set in Edencroft, Kent, England (goes from 1859 through 1862).  Elodie Buchanan is the eldest sister (boy died before she was born) at seventeen.  Elodie has nine sisters.  Their father, Reginald Buchanan, is a plant hunter and only returns once a year (to get mum pregnant again).  He now considers himself a man of science (though he used to study theology).  Their mother is a bishop’s daughter.  She thought she was marrying a future priest (you have to feel sorry for her).  Reginald does not understand girls and is distant with them.  Instead of a dollhouse for the girls, he brought a Wardian case set up a fairy garden (only Elodie appreciated it) with delicate plants in it.  The parents argue and Reginald is off again.  This time he does not return home.  Something happens to him in China, and he will not come home.  Elodie finds out that Reginald reneged on a contract for a rare orchid to Erasmus Pringle.   He either has to return to China for the orchid or pay the amount in the contract (which he does not have).  Elodie talks her father into returning to China with her by his side (Reginald really does not wish to return).  Her father nixes the idea of Elodie going with him.  Elodie helps him get ready for the trip. They have to hurry because Reginald needs to find the orchid before a rival plant hunter.  Whoever retrieves it first, gets the money (and then the father will still be in hot water—debtor’s prison).  Elodie is sent home just before her father sets sail.   An encounter at the train station has Elodie sneaking aboard the ship.  Elodie is in for the adventure of a lifetime and she cannot wait!

The Forbidden Orchid is interesting, but I did find the novel a little slow (and predictable).  I could have told you how this novel would end from the time Elodie stowed away on the ship.  The descriptions of the orchids were just lovely.  It was also interesting to find out more about the life of plant hunters.  Nowadays, we just go to our local nursery to purchase flowers.  I found the Victorian viewpoints on orchids to be ridiculous (I wanted to deck Deacon Wainwright, the pompous blowhard).  I give The Forbidden Orchid 3.75 out of 5 stars.   Would I read this book again?  No.  Did I enjoy it?  Yes and no.    I just wanted something more (less predictability).  Would I read another book by this author?  Maybe (depends upon the subject matter)!  I did enjoy the mystery of the missing orchid (someone stole it from Elodie’s Wardian case).

I have just told you a little bit of what happens in this novel.  There is also romance (between Elodie and a second mate on the ship). By the way, a Wardian case is a glass and wood case (like a terrarium) built to transport flowers (while traveling). They are named after Nathaniel B. Ward, a botanist. Sharon Biggs Waller is available on Twitter at I received a complimentary copy of The Forbidden Orchid from NetGalley in exchange for an honest evaluation of the book.

I am currently reading Silence of the Lamps by Karen Rose Smith. I am off to do housework and laundry (I now have a lot of wet towels).  I hope all of you have a delightful and enjoyable day! Take care and Happy Reading!

Posted by Kris Anderson, The Avid Reader at 3:38 PM