House of the Hanging Jade 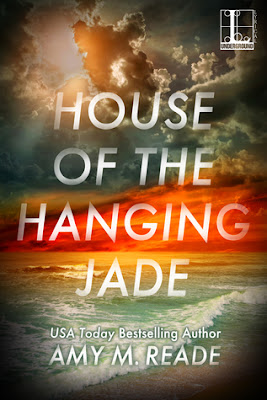 It is Hug an Australian Day (I believe you can easily guess what you are supposed to do on this day)!  It is also National Pretzel Day.  Pretzels are believed to be the world's oldest snack.  Monks took thin strips of dough, twisted them into the shape of children's arms in prayer, and then sprinkled them with salt!  I am certainly glad they created the pretzel (I love sourdough pretzels the best). William Shakespeare was baptized on April 26 in 1564 in Stratford-upon-Avon, Warwickshire, England.  In 1981 Dr. Michael Harrison performs the world's first human open fetal surgery (remember the picture of the little baby's hand sticking out of the womb).

House of the Hanging Jade is the latest mystery novel by Amy M. Reade.  Kailani Kanaka is a chef that is currently living in Washington, D.C.  Kailani is from Hawaii and is not enjoying a D.C. winter.  Kailani decides to return home to Kona and her family.  Geoffrey Corcoran is the owner of the restaurant where she works and her current boyfriend.  They have only been dating for a short while, but Kailani knows he is not the one (too clingy).  The Kanaka is happy for their daughter to return home and spread the word that she is looking for a position.  Kailani receives a call from Dr. Barbara Merriweather-Jorgensen.  Barbie (as she prefers to be called) is looking for a personal chef for her family (husband and two children).  Kailani will live on the premises and she is asked to introduce more nutritional foods to the family.  Kailani soon finds that there are secrets within the Jorgensen house and Kailani does her best to protect the children.  Then Dr. Douglas Fitzgibbons, an associate of Barbie’s turns up dead at the house.  The number one suspect is Lars Jorgensen, Barbie’s husband (turns out that Douglas was more than a work associate).  Then Kailani’s ex-boyfriend turns up on the Big Island.   Geoffrey cannot seem to take no for an answer.  How far is Geoffrey willing to go to have Kailani as his girlfriend?  Who killed Dr. Fitzgibbons?  What happens when someone else turns up dead on the estate?

Overall, I enjoyed reading House of the Hanging Jade.  I was immediately drawn into the book.  I just wish the murder had been harder to solve (I could have told you who the killer was right after they found the body).  There is also the expected romance (I could see it coming but I kept hoping the author would not do it).  The book is peppered with native phrases (glossary at the end of the book).  There is quite a bit of food talk in the book (she is a chef) and gorgeous descriptions of the scenery.  Kailani’s reactions to the Geoffrey are odd.  Kailani did not tell him to buzz off or go away (at first).  She did not want to hurt his feelings (if a guy is being creepy you need to be firm).  I give House of the Hanging Jade 3.75 out of 5 stars.  The book had a good flow (no slow parts) that kept me reading.  I will definitely read more books by Amy Reade.

Other books by Amy Reade are The Ghosts of Peppernell Manor (good book) and Secrets of Hallstead House.  I received a complimentary copy of House of the Hanging Jade from NetGalley in exchange for an honest evaluation of the novel.

I am taking it easy today.  I have caught a cold that is slowly migrating to my lungs (it always happens because of my asthma).  I am currently reading Front Page Affair by Radha Vatsal.  Have an enjoyable day! Take care (stay well) and Happy Reading!