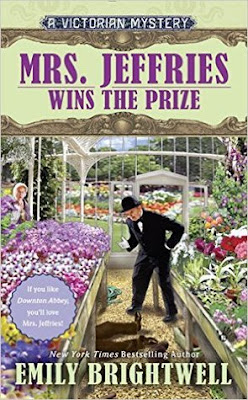 Happy Sunday!  Did you know . . . The Pony Express began delivering mail on this day in 1860, the first public mobile phone calls was made in 1973 (Motorola engineer Martin Cooper stood on a sidewalk in Manhattan and called the company's main competitor, Joe Engel at Bell Labs), and the Osborne 1, the first successful portable computer, was unveiled in 1981!


Mrs. Jeffries Wins the Prize is thirty-fourth book in A Victorian Mystery series. The ladies of The Mayfair Orchid and Exotic Plant Society are getting their plants ready for the annual competition.  They are meeting at Helena Rayburn’s when they hear a scream.  They all go running into the conservatory to find a dead body.  Hiram Filmore, who supplies the plants for the ladies (the exotic and unusual), has a pair of shears in his chest.  What was he doing in Mrs. Rayburn’s conservatory?  Inspector Gerald Witherspoon is assigned the case (which thrills his housekeeper, Mrs. Jeffries).  It looks like someone is setting up Mrs. Rayburn (who is not the nicest person) when all the evidence points to her.  Mrs. Jeffries, Smythe, Betsy, Wiggins, and the gang are on the case.  They work behind the scenes gathering clues to help Inspector Witherspoon solve the case.

Mrs. Jeffries Wins the Prize was not my type of book (I just found it lacking).  I am afraid that I did not enjoy it.  There was just too much going on in this book and the mystery was child's play to solve (It was so obvious).  The author did provide great clues that the reader can follow (which I liked).  However, there are too many characters, and I could not understand some of their accents (which is where I started skimming).  I give Mrs. Jeffries Wins the Prize 3 out of 5 stars.  I would recommend that you not start the series with this book.  I think it would be helpful to read at least the first book in the series The Inspector and Mrs. Jeffries.

You can follow Emily Brightwell on Amazon to get updates on her latest releases.  You can also find the other books in A Victorian Mystery series. I received a complimentary copy of Mrs. Jeffries Wins the Prize from NetGalley in exchange for an honest review.

Thank you for stopping by!  I am off to feed the kiddies (i.e. cats and dogs).  I hope all of you have had a nice, relaxing weekend. Call the Midwife starts tonight on PBS (and Mr. Selfridge is also on).  Take care and Happy Reading!