The Semester of Our Discontent 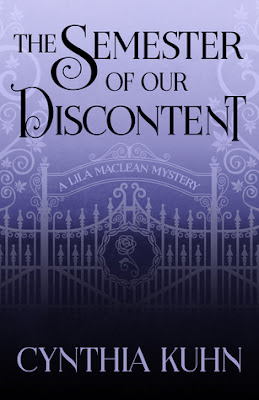 Happy Saturday.  Is everyone enjoying the cooler weather today?  I am going to enjoy it while it lasts (for soon it will be very hot in my area).  Doozy came to me about 1 a.m. and wanted me to follow him.  I thought he had to go outside, but he led me to his water dish.  He then thumped his paw in it to show me that it was empty.  He just finished emptying the food dishes and needed a drink (I am amazed at how much water they go through).  It just made me laugh  He was so cute (I may be biased).  On April 9 . . . in 1860 Edouard-Leon Scott de Martinville (can you imagine having to sign this name on a check) a Parisian bookseller set up his phonautograph (his new invention).  He records a person singing.  Thomas Edison will not do this for twenty-eight years (and we will not have MP3 players for 133 years).  It is the oldest surviving record of the human voice!  NASA introduces the seven astronauts they have picked for the Mercury project in 1959.  The United States Senate passed a law making Winston Churchill the first honorary United States citizen in 1963.  And, last but not least, the first British made Concorde 002 makes it maiden voyage in 1969.

The Semester of our Discontent by Cynthia Kuhn is the first book in the new Lila Maclean Mystery series.  Lila Maclean is a new assistant professor at Stonedale University in Stonedale, Colorado.  Lila just graduated from NYU the previous spring.  Lila is going to a faculty meeting with her faculty mentor, Judith Westerly.  They enter the conference room to find Roland Higgins dead on the table!  He was stabbed with a knife with a pattern on it.  Roland Higgins was not well liked (he was pompous, egotistical, rude, and down on women) so the suspect list is long.  However, Detective Lexington Archer (Stonedale Police Department) seems to have narrowed it down to Calista James, Lila’s cousin (Lila’s mom raised both girls).  The knife (decorative) belonged to Calista.   Then Judith Westerly, English professor and Lila’s faculty mentor, is attacked with a book (a very big and heavy book).  The book has the same decorative pattern as the knife.  The police find the pattern on Calista’s computer and she is arrested.  Lila knows Calista did not commit the murder (or attack Judith) and sets out to prove her innocence.  Someone, though, does not like her poking around.  Lila’s office is trashed and then bookshelves are sent tumbling down upon her in the library.  The killer means business.  Then Eldon Higgins (Roland’s brother and has the same attitude problems) is murdered (and Calista has a great alibi).  Can the killer be apprehended before more people are murdered?

The Semester of our Discontent was not as good as I was hoping it would be.  The book contained too much about academic life.  Professors have to publish or perish which was repeated a few times in the novel.  It also discusses the politics of academia which dominated the book.  The murder occurred in the first chapter (within the first few pages) of the book which was too early.  There was really no lead in to it and then we have the whole novel to get through as the main character tries to find the killer.  I thought the killer was extremely obvious.  I knew the identity of the killer when the body was discovered.  The writer did try to distract the reader and lead them down the wrong path with different theories.  The Semester of our Discontent contains many literary references and quotes (from classic literature).  I think the book was a little overdone (with the academic life and literary references).  The average reader might not enjoy all the references to classic books.  I give The Semester of our Discontent 3 out of 5 stars.  I think the series has potential.  I will be interested to read the next book in the Lila Maclean Mystery series to see if there is improvement.

You can follow Cynthia Kuhn (and other authors) on Amazon to get updates on her latest releases. I received a complimentary copy of The Semester of our Discontent from NetGalley in exchange for an honest review of the novel.

I hope all of you have a delightful day.  I am off to do housework, feed the animals, etc.  I am currently reading Can You Keep a Secret? A Fear Street Novel by R.L. Stine.  Make sure you have some fun today and do not forget the season premiere of Outlander tonight!  Take care and Happy Reading!

Posted by Kris Anderson, The Avid Reader at 3:32 PM