Murder on the Hour 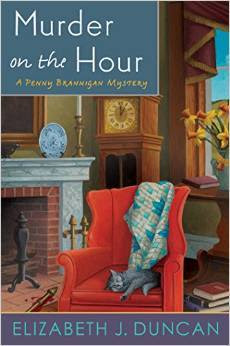 Happy Pig in a Blanket Day (I am talking about the food)!  You celebrate this day by eating them (I think I will just skip it).  One of my cats, Miss Penny (she is fifteen years old) has decided she wants to brave the dogs and live on their side of the house (the cats live in two rooms where the dogs are not allowed.  Trust me they have it made). So I purchased her a cat tree to keep her occupied (and off my stuff).  Today she was quite insistent that I put it together (sat on the base and kept meowing at me).  You should have seen her when I finished.  She hopped up to the highest part and acted like she was a Queen!  Events that occurred on April 24 are . . . Buffalo Bill hired  Annie Oakley to be in his (popular at the time) Wild West Show; Mary, Queen of Scots, marries the Dauphin of France, Francois, at Notre Dame de Paris (the show, Reign, took a few liberties with this); the Library of Congress is established by President John Adams in 1800; and in 1953 Winston Churchill is knighted by Queen Elizabeth II.


Murder on the Hour by Elizabeth J. Duncan is the seventh book in A Penny Brannigan Mystery series.  The Antiques Cymru (like our Antiques Roadshow) is coming to Llanelen, North Wales.  The townspeople are hunting their homes for special pieces hoping they will be picked to be on air (and that their item will be valuable).  Penny Brannigan, co-owner of Llanelen Spa, was asked by Emyr Gruffydd to help organize the event.  Haydn Williams has special items in his home that were made by craftsman in Wales.  He has been asked to bring his John Owen clock to the show to be evaluated for the show.  Half of a map is found in the clock (curious).  Catrin Bellis brought a beautiful quilt to be evaluated.  Catrin is just starting to blossom.  Her parents were extremely religious and strict.  They recently passed away so Catrin has started to make changes to her appearance.  After Catrin’s quilt was appraised, the appraiser told her something in private.  Later that day Catrin is found dead in her home and the quilt is missing.  What did the evaluator tell Catrin about the quilt?  And did someone happen to overhear them?  DCI Gareth Davies and DI Bethan Morgan (new detective) are assigned the case.  But you know that Penny cannot help but look into the matter, especially when she spots someone with the quilt.  Read Murder on the Hour to join Penny Brannigan as she follows the clues to solve Catrin Bellis’ murder (and her chance at a new romantic interest).

The other books in A Penny Brannigan Mystery series are The Cold Light of Mourning, A Brush with Death, A Killer's Christmas in Wales, A Small Hill to Die On, Never Laugh as a Hearse Goes By, and Slated for Death (I am hoping for a sale so I can purchase the whole series).  I received a complimentary copy of Murder on the Hour from NetGalley in exchange for an honest evaluation of the novel.

I hope everyone had a delightful weekend.  I am going to go cook my dinner and relax (before my mother starts her talking session). Take care and Happy Reading!

Posted by Kris Anderson, The Avid Reader at 6:50 PM