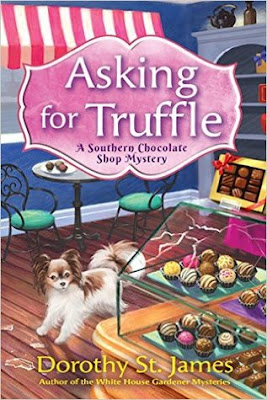 Hello!  On Tuesday, September 12 there are some new book releases.  They include Doom with a View by Kate Kingsbury, All the Secret Places by Anna Carlisle, Body on Baker Street by Vicki Delaney, Cat Got Your Secrets by Julie Chase, Asking for Truffle by Dorothy St. James, and An Amish Christmas Love by Amy Clipston, Beth Wiseman, Ruth Reid, and Kelly Irvin.  I hope you find some delightful new books to read!


Asking for Truffle by Dorothy St. James is the first story in A Southern Chocolate Shop Mystery series.  Charity Penn lives in Madison, Wisconsin with Granny Mae Stoughton who helped raise her. Penn has won a trip to Camellia Beach, South Carolina along with cooking lessons, but she never entered a contest. She is suspicious (fears it is a scam or someone trying to get her money) and asks her best friend, Skinny McGee to check it out for her.  Skinny leaves her a message stating he knows why she won the contest and will contact her the next morning to share what he uncovered.  Unfortunately, Skinny is drowned in a vat of chocolate at the Chocolate Box during the night.  Penn along with her dog, Stella (a barker and a biter) heads to Camellia Beach to find out what happened to her friend.  Penn visits the Chocolate Box and starts taking chocolate making lessons from Mabel Maybank and her partner, Bertie Bays.   But it is not all sunshine and rainbows in this small, island town.  Another death occurs and Penn is dropped into the middle of a controversy.   Penn needs to find the guilty party before she becomes the next casualty.

Asking for Truffle had such an interesting premise.  I liked the Chocolate Box, Mabel, Bertie, Althea, and the luscious sounding chocolates.  Penn, on the other hand, is very unlikeable.  She is prickly as a porcupine, standoffish and a whiner.  Penn complains constantly about her family (I admit they leave a lot to be desired, but I tired of hearing about them), her trust issues, people wanting her families’ money, her lack of cooking skills, her grandmother dislike of her, her aversion of anything related to magic, ghosts, crystals, and such.  The same details are repeated frequently throughout the story (I’m surprised someone had not tried to kill her prior to this). Penn states she has learned from her past mistakes, but she keeps making the same ones.  Her dog, Stella (a gift from Erik, the Cheese King—we never learn his full name) is a horror (bites everyone and barks constantly—though it does seem like a smart dog).  It might help if Penn actually tried to train Stella or showed her love.  Asking for Truffle would have been a better story if the author had made Mabel and Bertie the main characters.   I felt Asking for Truffle was too long.  If all the repetition had been left out, it would have been a better length (along with cutting down on the numerous cooking scenes).  There are actually two mysteries (the murder and a burglary).  Neither are difficult to solve.  Most readers will be able to identify the guilty parties early in the story. Penn is lacking as a sleuth.  She comes to town and spends more time learning to make chocolate than investigating Skinny’s murder.  She receives an envelope from the detective with paperwork that Skinny received prior to his death, and Penn does not open it.  These are just two examples.  The conclusion was very unsatisfying.  The author should have included an epilogue to tie up the loose ends.  What is the Cheese King doing that is angering Penn’s family?  Why did Mabel change her will a month before Penn arrived in town?  Who is Penn’s mother?  These are just a couple of unanswered questions (very frustrating).  I am rating Asking for Truffle 2 out of 5 stars (I did not like the final product).  If you are looking for a good escape book, then I do not recommend Asking for Truffle (it is frustrating and depressing).  There are some scrumptious chocolate recipes at the end of the novel.

I appreciate you visiting today.  I will be reviewing An Amish Christmas Love by Amy Clipston, Beth Wiseman, Ruth Reid and Kelly Irvin on Tuesday (if I have electricity and wifi connection).  I hope each of you have a pleasant (and safe) Monday.  Take care and Happy Reading!