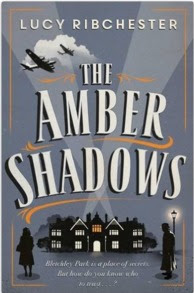 Hello!  I appreciate you stopping by today.  There are some delightful new books coming out this week. A Tale of Two Kitties by Sofie Kelly, Dead in the Water by Denise Swanson, Pudding Up with Murder by Julia Buckley, The Proving by Beverly Lewis, These Healing Hills by Ann Gabhart, The Christmas Blessing by Melody Carlson, A Secret History of Witches by Louisa Morgan and Protocol by Kathleen Valenti are some of the new novels.


The Amber Shadows by Lucy Ribchester starts off in December of 1942 at Bletchley Park.  Honey Deschamps is on her way to her lodgings when she is stopped by Felix Plaidstow and his dog, Nijinksy.  Felix states he works in Hut 6 in the park and he has a package for Honey that was misdelivered.   Honey examines the package in the privacy of her room at Mr. & Mrs. Steadman’s (her skinflint landlors).  The postmark has Cyrillic letters on it (Russian), and she finds a small square piece of amber inside.  Honey ends up tossing the package into the trash.  The next day she is at her desk decoding messages on her Typex machine when she receives another similar package.  The amber reminds Honey about a missive she saw about a year ago regarding the Germans dismantling the Amber Room from the Catherine Palace and a story her brother told her about their father being its curator.  Honey receives more of the mysterious amber packages.  Are they from a lost treasure or is Honey being tested?  Honey is unsure of who she should trust and turns to the mysterious Felix.  Can they unravel the clues and solve the amber puzzle?

The Amber Shadows sounded like such an intriguing story.  World War II, amber, coded messages, Bletchley Park, and a mystery.  Unfortunately, the blurb was better than the novel.  The book wandered and rambled on forever.  It lacked focus.  I was not a fan of the authors writing style (believe she is trying to set an atmosphere).  Honey kept making comparisons between her situation and the movie Suspicion (with Cary Grant).  I found it distracting (odd) and it did not enhance the story.  I do wish to commend the author on her research and realistic portrayal of life at Bletchely.  My rating for The Amber Shadows is 2 out of 5 stars (I did not like it).  The mystery was lacking.  It can easily be solved early in the story (it is obvious).  Honey is lacking in her investigative skills.   She makes very little progress until the end of the story when all is revealed.  I struggled to wade through The Amber Shadows.  I was never able to get into the story.  The ending is very unsatisfying (made the whole mystery seem pointless).  I was not a fan of the main character (I disliked Honey), mystery or writing.

May each of you have a nice, relaxing Sunday.  I am trying to catch up on my reading from when I was too ill to read.  I will be reviewing Oh, Fudge by Nancy Coco on Monday.  Take care and Happy Reading!