Dead in the Water: Welcome to Scumble River 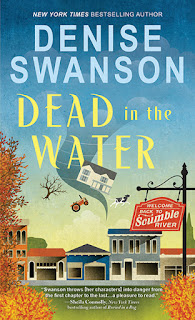 Happy Book Release Day!  Nothing better than waking up to find new books on my reading device. A few of the new releases out today are A Tale of Two Kitties by Sofie Kelly, Pudding Up with Murder by Julia Buckley, Protocol by Kathleen Valenti, A Secret History of Witches by Louisa Morgan, The Christmas Blessing by Melody Carlson, These Healing Hills by Ann Gabhart, and The Proving by Beverly Lewis.

Dead in the Water by Denise Swanson is the first book in the Welcome Back to Scumble River series.  Skye Denison-Boyd is at home when violent storms strike the area.  Wally rushes home to get Skye into the basement (along with Bingo, the cat) when the tornado sirens ring out there warning.  After the storm, they discover that their home is destroyed.  Three separate tornadoes struck Scumble River leaving devastation in its wake.  The mayor has Wally check on their newest councilman, Zeke Lyons who got separated from his family.  Wally finds Zeke dead in the bathroom of his home and knows his death cannot be attributed to the storm.  Who took advantage of the tornadoes to wipe out mild mannered Zeke Lyons?  Wally has a full plate with a murder investigation, rescuing citizens, the burglaries occurring around town, his limited staff, and a pregnant wife.  Wally heads out one afternoon and fails to return.  Sergeant Roy Quirk, Wally’s right hand, does not have the staff to hunt for Wally.  Skye calls Carson Boyd, Wally’s father, who flies in from Texas to help her.  What happened to Wally?  Will Caron and Skye be able to find him in time?  To find out what happens, pick up a copy of Dead in the Water.

Dead in the Water is the first book in Welcome Back to Scumble River series, but it is actually a continuation of A Scumble River Mystery series (with some changes).  This was my first visit to Scumble River, and I had no problem reading Dead in the Water.  Ms. Swanson provided the needed history on the main characters.  There are quite a few characters mentioned in the beginning (as Skye checks in on family and friends), but it settles down to a manageable level.      It has lively and quirky characters (except the mayor who I hope gets ousted in the upcoming election).  I thought the story was easy to read, had a good pace, and just the right amount of humor. The two mysteries were interesting with one being more complicated than the other.  I believe many readers will be surprised by the killer’s identity (depends on your sleuthing prowess).  I thought the method of murder was clever.  The ending is sweet and will leave you smiling.  I will definitely be reading the next installment in the Welcome Back to Scumble River series.

The publisher is hosting a Rafflecopter giveaway of There's No Place Like Scumble River Emergency Survival Kit (click to be taken to giveaway).  Enter for a chance to win! I hope that each of you have a lovely day.  I will be reviewing Cat Got Your Secrets by Julie Chase next time.  Take care and Happy Reading!