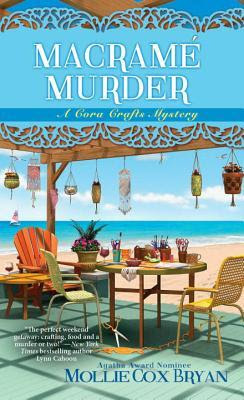 Welcome!  To Be Where You Are by Jan Karon will be out on September 19.  It is the fourteenth novel in the Mitford series.  I look forward to seeing what Father Tim and Cynthia are up to this time (I am starting it tonight).  I had the opportunity to read a new sci-fi book this weekend, and I just loved it.  It is Invictus by Ryan Graudin and it will be out on September 26.  It is aimed at a younger audience, but I recommend it for any reader who loves fast paced, time traveling adventures (reminiscent of Timeless on NBC but with younger characters).

Macramé Murder by Mollie Cox Bryan is the third installment in A Cora Crafts Mystery series.  Cora Chevalier is off to the Big Island Craft Retreat on Sea Glass Island with Ruby and Jane.  Cora and her boyfriend, Adrian arrived early so she could spend some quality time together.  While walking on the beach with Adrian, Cora observes a mermaid themed wedding with the bride wearing a beautiful one-of-a-kind tiara.  The next morning Cora hears that the bride, Marcy Grimm was discovered dead on the beach.  Cora is shocked when Adrian is taken in for questioning.  It seems Adrian has been keeping some secrets.  Cora knows that Adrian did not kill Marcy and sets out to prove it.  When another body turns up and someone close to Cora is harmed, Cora knows she needs to find the culprit quickly.  Will Cora be able to find the killer before it is too late?

Macramé Murder is nicely written, has a good pace and it is easy to read.  I like the craft aspect of the series and various crafts described in the book.  The sea glass and shell tiara was beautifully described (my daughter would love it—Little Mermaid fan).  Macramé Murder can be a standalone novel.  Cora and her associates history is supplied along with the details of the previous two cases (in the first two books in the series).  My rating for Macramé Murder is 3 out of 5 stars (I was left wanting more).  I thought the murder was interesting (there were some good parts), but the killer obvious (at least to me).  There is a twist, but many readers will anticipate it (it was predictable).  I never felt the suspense, though, in the story.  Cora’s numerous panic attacks and anxiety quickly got on my nerves.  You would think she would be at an old hat at murder by now (I suggest she get a new medication).  Cora is a hard character to like (I have really tried). The romance was too prominent for my tastes, and I am not a fan of Adrian.  Then there is the love triangle between Cora, Adrian, and Cashel (Cora should pick him).  Personally, I feel that Cora and Adrian’s romance is progressing too quickly (they just started dating).  I wish there had been less focus on Cora’s personal life and more on the mystery.  The story felt long (especially since the first murder happened so early in the story), and I thought there was too much time devoted to Cora thinking (internal dialogue).  The first two books in A Cora Crafts Mystery series are Death Among the Doilies and No Charm Intended.  For readers who prefer light, easy breezy cozy mysteries (like my mother), then check out Macrame Murder.

Thank you for stopping by and reading my latest review.  I will be reviewing The Proving by Beverly Lewis on Friday.  May you have a happy Thursday.  Take care, stay safe and Happy Reading!