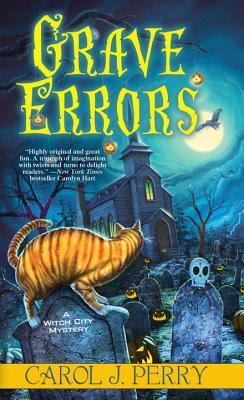 Welcome!  Dead in the Water by Denise Swanson will be out on Tuesday, September 5.  It is the first book in Welcome Back to Scumble River series.  I will be featuring this cozy mystery on the release day!


Grave Errors by Carol J. Perry is the fifth story in A Witch City Mystery series.  Lee Barrett is teaching a television production class at Tabitha Trumbull Academy of the Arts that is focusing on interview skills and investigative reporting.  The annual class assignment is to produce a video involving some aspect of Salem’s history and the students have decided to highlight Dia de los Muertos (Day of the Dead).  Dorothy Alden, one of Lee’s students, is taking the class for personal reasons.  Dorothy’s sister, Emily passed away recently from an overdose of sleeping pills and alcohol.  Dorothy believes her sister was murdered and is looking for proof.  She hopes the class will give her the skills she needs.  Lee wants to help Dorothy and is quickly drawn into the investigation.  With the aid of her visions, O’Ryan (her cat) and her detective boyfriend, Lee sets out to get answers and closure for Dorothy.

Grave Errors is the fifth installment in A Witch City Mystery series and it can be read as a stand-alone novel.  We are given a background history on Lee along a synopsis of her previous cases.  The writing style made the book easy to read, but the pace was a little slow. There to be too many mundane details.  I do not need to know every single meal Lee eats (each food item), when she changes clothes (and what she is wearing), going up steps, etc.  My rating for Grave Errors is 3.5 out of 5 stars.  There is a nice mixture of characters, and I really appreciate that the author does not throw them at the reader all at once.  The mystery had some good elements.  I thought the method of murder was very unique.  The culprit, though, can be identified long before the reveal.   I wish the author had put more effort into the mystery and spent less time on Lee’s love life.  I delighted in the supernatural elements and wish they had been played up more.  Lee has a wonderful gift and, after five books, she has yet to fully embrace (or accept) it.  The setting of Salem, Massachusetts is delightful (I would love to live in Salem).  I welcomed the history of the city that the author included (especially pertaining to Giles Corey).  It Takes a Coven will be the sixth novel in the series. It will be published in February 2018.

The other books in A Witch City Mystery series are Caught Dead Handed, Tails You Lose, Look Both Ways and Murder Go Round.  Thank you for visiting and reading my latest review.  I will be evaluating The Amber Shadows by Lucy Ribchester next time.  May each of you have a very special Saturday.  Take care and Happy Reading!