Doom with a View: A Merry Ghost Inn Mystery 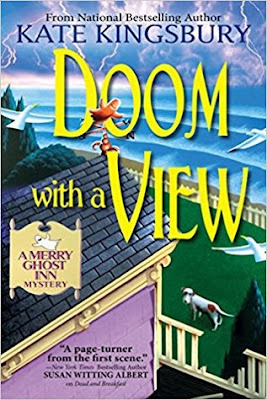 
Doom with a View by Kate Kingsbury is the second tale in A Merry Ghost Inn Mystery series.  Melanie West and her grandmother, Liza Harris own the Merry Ghost Inn in Sully’s Landing, Oregon.  They are open and booked with six guests from Portland who all belong to the same book club.  The guests are currently being entertained by Cindi’s (their assistant) magician boyfriend, Nick Hazelton.  Walter Dexter, though, is not enjoying Nick’s act (continuous heckling and complaining).  The next morning, Melanie hears Max barking (like he is upset) outside and goes to investigate.  She finds Walter dead from where he fell from the balcony.  Officer Ben Carter is the first responder and discovers someone tampered with the balcony.  Which one of their guests disliked Walter enough to kill him?  Detective Tom Dutton (aka Grumpy) is assigned the case and issues a stern warning to Melanie and Liza not to investigate.  They have no intention of listening to him.  The pair, with the aid of their resident ghost-Orville, set out to nab a killer.

Doom with A View is a cute story with a subtle paranormal element.  I found the book easy to read and it has a nice, steady pace.  I had not the opportunity to read Dead and Breakfast (first book in series) prior to picking up Doom with a View.  I was a little confused in the beginning because the author starts introducing the main characters along with all the guests (ten people, one dog, and a ghost).  Once I got all the characters straight, I was fine.  I was surprised that Melanie and Liza had hired an assistant.  You would think they would wait until they started turning a profit.  I thought it was strange that the owners did not share news with the guests themselves.  Instead, they would send out Cindi to announce activities and such.  It seemed odd and out of place (especially with Cindi’s appearance).  I am rating Doom with a View 3.5 out of 5 stars.  The mystery was not complicated and I thought the killer stood out (eliminate the obvious).  The author does provide some pointed clues that will aid readers in solving the murder.  I wish there had been more sleuthing or active investigating (instead of them just asking questions).  I loved the ghost, Orville.  He would laugh and move items around the house.  Quite a bit of the book is devoted to cooking and eating (wanted less of this and more mystery).  One thing I am extremely tired of in cozy mysteries is grumpy, mean detectives.  Detective Dutton did nothing to enhance the story.  Instead we get numerous mentions of his grumpiness.  Doom with a View is an appealing cozy mystery.  It has good main characters, quirky inn, a ghost, and a dog.  A little fiddling and A Merry Ghost Inn Mystery series would be delightful.

I appreciate you visiting and reading my review.  On Thursday, September 21 I will be evaluating Secrets of the Shipyard Girls by Nancy Revell.    May each of you have a wonderful Wednesday. Take care and Happy Reading!