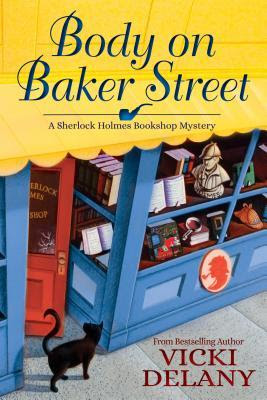 Happy Saturday!  Vicki Delany is the author of A Year-Round Christmas Mystery series, A Constable Molly Smith series, and A Sherlock Holmes Bookshop Mystery series.  As Eva Gates she has written A Lighthouse Library Mystery series (a new one will be out next June).  Readers can follow the author on Facebook and Amazon.


Body on Baker Street by Vicki Delany is the second cozy mystery in A Sherlock Holmes Bookshop Mystery series.  Gemma Doyle co-owns (and manages) Sherlock Holmes Bookshop and Emporium in West London, Massachusetts.  Gemma is surprised when author Renalta Van Markoff wishes to set up a last-minute book signing.  The day of the signing the store is packed with fans and things are going smoothly until Donald Morris starts in on Renalta about her portrayal of Sherlock Holmes in her novels.  The author counters Donald’s arguments successfully and proceeds with signing books.  After taking a drink of water, the author starts gasping and collapses—she is dead.  Donald ends up being the prime suspect in the author’s murder when it is discovered he had the means, motive and opportunity.  Gemma with Jayne’s assistance sets out to find the killer.  One thing not lacking in this case is suspects.  Which one of them disliked Renalta enough to do her in?

Body on Baker Street is the second book in the series, but it can be read alone.  Everything the reader needs to know is included in this story.  The mystery was intriguing and I think that many people will be surprised by the killer’s identity.  There are good clues that will aid readers in solving the crime (armchair sleuths should have no problem in figuring it out).  My rating for Body on Baker Street is 3 out of 5 stars.  My main problem with the series is Gemma Doyle.  Gemma is a difficult character to like (rude, obnoxious, know-it-all).  Gemma’s attitude is off-putting (I am surprised someone has not killed her off).  Her way is the right way and she is always right.  I especially did not like her mocking the police.  I appreciate that Gemma is a strong, female protagonist with keen observation skills (everyone knows I prefer strong female main characters).  It would have been nice (preferable) if Gemma was more personable. I wish the author had made Jayne the main character (and we did not get much of Jayne in Body on Baker Street).  Most of the investigation involved Gemma talking to people.  I know this is vital to a good investigation, but it can get tedious (and frustrating).  Gemma’s rude attitude when talking to people was a turnoff (I could not figure out why anyone answered her questions).  I can understand why Moriarty (the shop cat) lashes out at Gemma!  The first book in A Sherlock Holmes Bookshop Mystery series is Elementary, She Read.  The Cat of the Baskervilles will be the third installment in this series and it will be out on February 13, 2018.

I appreciate you visiting today.  I will be evaluating The Christmas Blessing by Melody Carlson on my next blog posting.  May each of you have a nice, relaxing Saturday.  Take care and Happy Reading!