The West Woods: The Fountain series 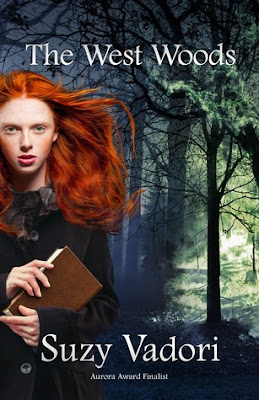 Welcome, fellow readers!  On September 26 some delightful new books will be released.  A few of the titles are Home All Along by Beth Wiseman (good story), A Hive of Homicides by Meera Lester, Purring Around the Christmas Tree by Liz Mugavero (some poisons Santa), Holiday Murder by Leslie Meier, and Yuletide Homicide by Jennifer David Hesse.


The West Woods by Suzy Vadori is the second novel in The Fountain series.  Courtney Wallis tried to convince her father to her not return to St. Augustus after the winter break.  Jim Wallis, Courtney’s father, told her that the school is special and he wants her to discover the answer on her own.  He tells her that the West Woods are the key.  That evening on a dare Courtney is running through the woods when her foot falls into a hole.  She discovers a wood box with a key inside.  Is this the key her father was referring to?  After listening to Ms. Krick’s lecture on the school’s history, the teacher talks to Courtney privately.  Ms. Krick wants Courtney’s help in discovering the location of the fountain.  She wants to make a wish.  Courtney is not sure what to make of Ms. Krick and her rantings.  Later, Courtney then receives a map that her father left with her sister, Hanna.  The map leads Courtney back into the West Woods where she finds a fountain.  She makes a wish not expecting it to actually come true.  Once a wish is made, though, it must be fulfilled—no matter what the cost.

The West Woods is a prequel to The Fountain.  I found the book to have a good pace, but I was not fully engaged.  The West Woods did not hold the same appeal as The Fountain. The West Woods is a young-adult novel that will appeal to tweens and teens (especially with Halloween fast approaching).  There was a little too much focus on boys for my taste (it seemed to dominate the first half of the story).  I wish there had been less attention on romance and more on the magic.  Just when the paranormal action starts to heat up, the book quickly ends (I felt the séance scene was a bust).  I felt The West Woods did not live up to its potential (especially after reading The Fountain).  I had trouble liking Courtney and especially disliked Violet, the school gossip.  It was interesting to find out more about the school and Ms. Krick.  My rating for The West Woods is 3 out of 5 stars.  I did like the moral of the story.  I do recommend checking out The Fountain (I gave it 4.25 stars).

I really appreciate you reading my book reviews.  I will be discussing Body on Baker Street by Vicki Delany next time.  May each of you have a delightful day. Take care and Happy Reading!