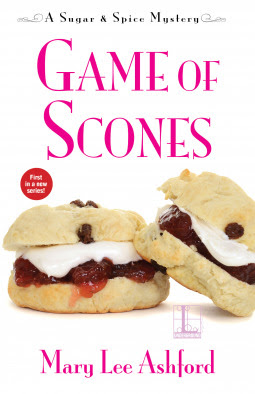 Good Day!  The Promised Amish Bride by Marta Perry releases on February 1.  It is a Love Inspired novel (clean romance story).  Silent Night by Danielle Steel will be out on March 5.  I may not seem the type for Danielle Steel books, but I have been reading her novels since I was 12 (I am not kidding).  My sister, Nicole also reads her books (it is shocking, but we actually have something in common).

Game of Scones by Mary Lee Ashford takes us to St. Ignatius, Iowa.   After the publishing company Rosetta Sugarbaker Calloway aka Sugar worked for downsized, she moved to St. Ignatius, Iowa.  Sugar joined her friend, Dixie Spicer to open Sugar and Spice Publishing to produce community cookbooks.  Their first project is the St. Ignatius Founders’ Day Commemorative Cookbook which is due to the printer in six weeks. Unfortunately, a scone war has broken out between Elsie Farmer and Bertie Sparks.  Only one scone recipe is needed for the book, but neither women is about to back down.  The next day Sugar heads over to Elsie’s house to talk to her about the scone situation.  When no one answers her knock, Sugar heads around to the back yard.  She notices someone disappearing through the bushes and finds Elsie dead on the ground with a scone in her hand.  Elsie was poisoned, and the evidence leads straight to Dixie’s Aunt Bertie who has disappeared.  Someone is setting up Bertie to take the fall which angers Dixie.  Sugar and Dixie start sifting through the clues and suspects.  Can they serve up the killer before he strikes again?  While investigating the murder, the pair need to continue working on the cookbook.  Dixie cooks up the recipes from the upcoming cookbook for handsome photographer, Max Windsor to snap.  Sugar is also dealing with a cranky neighbor and her elderly landlady who seems to need something she stowed in her attic daily (lonely for company at the senior living facility).  Will Sugar and Dixie get the cookbook completed in time while trying to crack the whodunit?

Game of Scones is a lighthearted cozy mystery with a charming small town and a variety of quirky characters.  I did feel like the book could have used a little reworking.  Sometimes the story moved along and other times it dragged from the amount of detail especially on how a cookbook is published (you have to wonder how Dixie and Sugar stay in business with only one client).  There were a couple of subplots in addition to the main mystery.  There is the cantankerous neighbor who seems to nitpick (I had a grandmother like that).  Greer, Sugar’s landlady, who has moved into the local senior living facility.  She left a number of her possessions in the attic of her home that she has rented to Sugar and calls Sugar frequently for a miscellaneous knickknack.  Then Greer’s son gets it in his head that Sugar is taking advantage of his mother.  There is a hint of romance between Max and Sugar plus Dixie and Sheriff Griffin.  Numerous townspeople are introduced in Game of Scones.  All the characters felt superficial and flat.  I wanted more character development to bring our main characters to life.  I did like the description of St. Ignatius.  The mystery is straightforward with the guilty party easily identified.  There are a limited number of suspects and little investigating.  The story follows Sugar on her day-to-day activities and her interactions with the people she encounters. Though Game of Scones is not set in the South, it reminds me of a certain authors Southern cozy mysteries.   I am giving Game of Scones 3 out of 5 stars.  There are two scone recipes at the end of the book.  Game of Scones contains a great deal of cooking and eating along with a cat, a dog, nosy townspeople, plenty of gossip, a mysterious aunt, a make-up maven, flirting, and thorny whodunit.

Risky Biscuits is the next A Sugar & Spice Mystery which will be out on July 9.  I appreciate you visiting today.  I plan on featuring In Times Gone By by Tracie Peterson next time.  It is the third novel in Golden Gate Secrets series.  I hope you have a splendid day.  Take care and Happy Reading! 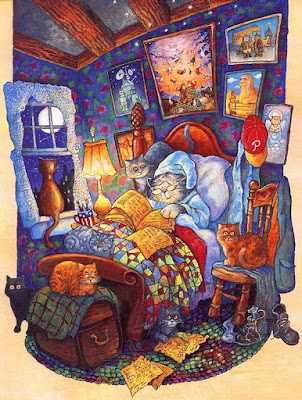