The Bride of Ivy Green by Julie Klassen 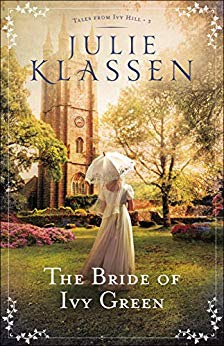 Greetings! Death by Dog Show by Arlene Kay releases on March 5 along with Broken Bone China by Laura Childs.  The Last Year of the War by Susan Meissner will be published on March 19.  Leave No Scone Unturned by Denise Swanson comes out on March 26.  Get ready for a busy spring of reading!

The Bride of Ivy Green by Julie Klassen takes us back to February 1821 in Ivy Hill, Wiltshire, England.  Mercy Grove and her aunt, Matilda are preparing for the arrival of hew newly married brother, George and his society bride, Helena.  Mercy was forced to close her school and have the lending library move to a new location in anticipation of the new occupants.  She misses Alice who she wished to adopt until her biological father and hotelier, James Drake arrived on the scene.  When Helena makes living in the home uncomfortable, Mercy contemplates becoming a governess.  Jane Bell has a big decision to make.  Gabriel Locke has proposed to Jane and, while she loves him, it would mean giving up her inn.  Plus, she is unable to have children and Jane does not want Gabriel to make such a sacrifice.  Then someone Jane never expected to see again returns to Ivy Hill.  The dressmakers shop is let by a new woman to town who answers to the name of Madame Victorine.  She doesn’t share many details of her past and Jane feels she looks familiar.  Victorine has beautiful dresses on display, but her sewing skills are not on the same caliber. Will the Ladies Tea and Knitting Society help Victorine or help her new venture fail?  Justine, Lady Brockwell, has a matchmaking mother who is intent on her daughter marrying well.  Justine’s mother has her sights set on Sir Cyril, but Justine has eyes for a local gentleman.  Will Justine give into pressure from her demanding mother?  Wedding bells are ringing, but which woman in Ivy Hill will be walking down the aisle?

I have enjoyed my visits to Ivy Hill with Tales from Ivy Hill series.  I could not wait to get ahold of The Bride of Ivy Green to see what would happen with Mercy, Jane, Matty, and Justine.  I was especially looking forward to Mercy’s story because I wanted her to get a happy ending.  Tales from Ivy Hill is one series that you need to read in order.  Each book in the series builds upon the previous one.  The Bride of Ivy Green is a well-written story with a leisurely pace (sometimes a little too leisurely).   The setting is quaint with cozy shops and lovely homes (I picture stone homes with thatched roofs).  The characters are developed, and their personalities suit the time period.  They are all genteel and refined ladies with good manners.  I like that the women are close friends who look out for each other.  All the characters are friendly and likeable except Helena, George’s wife.  Her coldness and arrogance plus her indifference to Mercy’s feelings perfectly suit this unlikeable character.  I did not understand why the author decided to introduce Victorine to the story (it seemed too late in the series for this addition).  That time could have devoted to Justine’s or Matty’s story.  While the storylines did not play out how I would have liked them to (we all have expectations), I was happy with the outcome.  Julie Klassen captured the time period with the clothing, books, pastimes, and attitudes.  I am giving The Bride of Ivy Green 4 out of 5 stars (I liked it).  The Bride of Ivy Green is a satisfying conclusion to the Tales of Ivy Hill series.  I will miss visiting Ivy Hill and the charming ladies who inhabit it.

The first two books in The Tales of Ivy Hill are The Innkeeper of Ivy Hill and The Ladies of Ivy Cottage.  Thank you for joining me today.  I hope I have helped you discover a new series.  I am going to share my thoughts on A Daughter's Courage by Kitty Neale tomorrow.  I hope you have a pleasant day filled with happy thoughts.  Take care and Happy Reading! 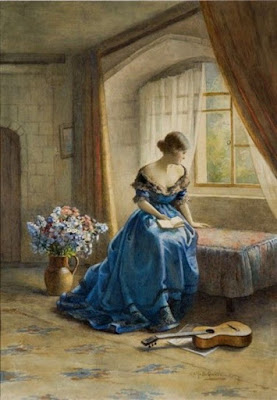