The Skeleton Stuffs a Stocking by Leigh Perry 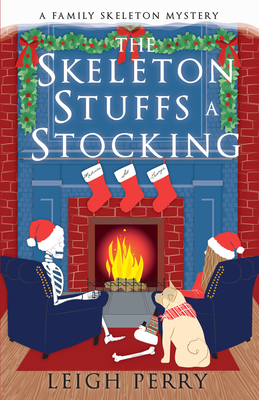 Welcome!  Leigh Perry is the author of A Family Skeleton Mystery series.  Sid, the walking and talking skeleton, is the best friend of Dr. Georgia Thackery.  Leigh Perry was born in Pensacola, Florida and raised in Charlotte, North Carolina.  She has been living in Boston, Massachusetts for the last twenty-six years.  Leigh lives with her husband, two daughters, two guinea pigs and a ludicrous amount of books (there is no such thing). While the number of people and guinea pigs remain constant, the number of books continues to rise. Sid was inspired old television shows Leigh watched like Bewitched, I Dream of Jeannie and The Ghost & Mrs. Muir (great movie).  She writes A Family Skeleton Mystery series under the pen name of Leigh Perry because they were a departure from the type of novels she had written previously.  Under Toni L.P. Kelner she has eleven novels along with twenty something short stories.  She also co-edited five urban fantasy anthologies with Charlaine Harris.  Readers can follow Leigh Perry on Facebook and visit her website. 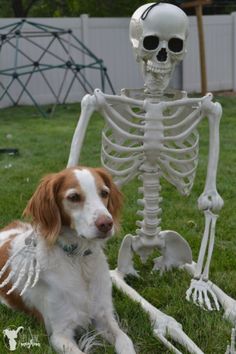 The Skeleton Stuffs a Stocking by Leigh Perry has Dr. Georgia Thackery along with her daughter, Madison and her best friend, Sid living back at home with her parents in Pennycross, Massachusetts.  Georgia is working as an adjunct at nearby Bostock College.  The family is looking forward to a joyful holiday where Sid can take part in all the festivities.  Sid has been searching online for the perfect gift for each family member.  Georgia arrives home from work to find an upset Madison pacing on the front porch.  It seems that one of her parents’ grad students let their dog, Byron slip out the door (again).  They locate Byron a short time later with a femur in his mouth.  The go to apologize to Sid only to discover that he has all his bones.  The retrace Byron’s path with Sgt. Louis Raymond and discover the rest of the bones buried in front of where the old Nichols house used to be.  Georgia has every intention of not investigating until she learns that her friend, Dr. Charles Peyton could be implicated in the victim’s death.  Sid is raring to go, and the pair set out to catch the killer before the Christmas. 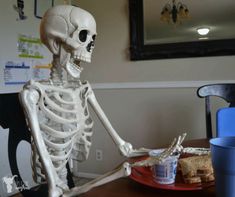 The Skeleton Stuffs a Stocking by Leigh Perry is the sixth novel in A Family Skeleton Mystery series.  It can be read as a standalone, but you will be missing out some fun adventures with Georgia and Sid.  Georgia and the Thackery family are looking forward to a merry holiday season with Sid by their side.  This will be the first Christmas they have all been together since Madison learned of Sid’s existence.  Then Byron is found with a femur bone in his mouth and it is not one of Sid’s (this time).  It seems that Byron stumbled upon a victim who has been dead at least ten years.  Georgia would like to sit out this case, but then her friend, Dr. Charles Peyton tells her information that if he shares with the police could get him arrested.  Georgia wants to solve the case and clear Charles.  Sid is thrilled that Georgia has changed her mind especially since he already has a spreadsheet started.  Can Georgia and Sid wrap up this chilly case before the holidays?  The Skeleton Stuffs a Stocking has such great characters.  I just love Sid.  He is such a unique character being a walking, talking skeleton.  He holds himself together by force of will.  I like that the family has outfitted his attic for him.  He has a busy online where he takes classes, communicates with friends, plays games, does research, and shops.  The mystery was interesting.  I like that it is a cold case which is harder for the duo to solve.  There is active investigating, good clues and even a twist that some people may not expect.  I like that Georgia meets up with Brownie once again.  There is only one thing standing in the way of Georgia having a fulfilling relationship with Brownie—Sid.  I love the humor in the story that has me laughing frequently.  The Thackery’s have a grad student who cannot stop talking about his dissertation or eating all the Thackery’s food.  He provided some snarky comments and amusing moments.  The Skeleton Stuffs a Stocking is a lively tale with staff on strike, a cold case, a previous paramour, an abandoned abode, and happy holiday happenings. 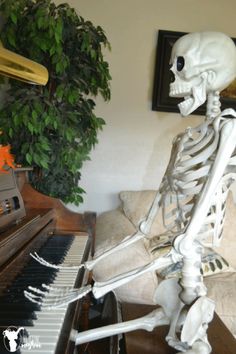 The Skeleton Stuffs a Stocking can be picked up here* (Amazon UK).  You will find the rest of A Family Skeleton Mystery series here (available in digital and paperback).  Thank you for stopping by today and reading my review.  I will return tomorrow with Address for Murder by Tonya Kappes.  It is the second novel in A Mail Carrier Cozy Mystery series (Stamped Out is the first book & it is available on Kindle Unlimited).  I hope that you have a happy day.  Take care and Happy Reading! 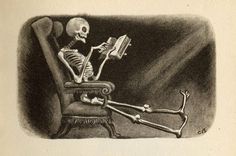