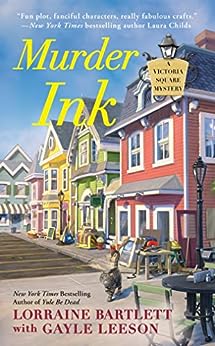 Good Day!  I hope everyone had a delightful holiday season.  Lorraine Bartlett is a multi-published and Agatha award winning author.  She also writes under the pen names of Lorna Barrett for her New York Times bestselling A Booktown Mystery series and L.L. Bartlett.  Some of this author's creations are The Lotus Bay Mysteries, Life on Victoria Square series, Jeff Resnick Mysteries, Tales from Telenia series, A Tale from Blythe Cove Manor series, as well as short stories and novellas.  Visit Lorraine's author page on Amazon to find out more about her and check out her books.  Visit Lorraine Bartlett's website to sign up for the author's newsletter and so much more.  You can also find Lorraine on Facebook. 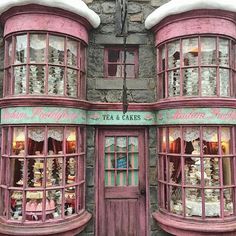 Murder Ink by Lorraine Bartlett with Gayle Leeson returns readers to Victoria Square in McKinlay Mill, New York.  Katie Bonner begins the Victoria Square Merchants Association meeting and opens the discussion about the current vacant buildings.  Paul Fenton stands up to state he is purchasing one of the properties to open a tattoo parlor which causes a slight uproar among the other owners.  Katie visits the property the next day hoping to soothe the troubled waters with Paul.  Ken Fenton, Paul’s brother, is inside doing renovations and is uninterested in listening to Katie.  He turns on his saw and WHAM!  Katie is tossed across the room and Ken Fenton is dead from electrocution.  Ray Davenport, owner of Wood U, becomes Detective Schuler prime suspect much to the detectives’ delight (just because Ray did not recommend him for position).  Katie is not going to let Ray get railroaded for a crime he did not commit, so she becomes asking questions.  Paul Fenton does not appreciate Katie’s nosing around his family and issues some nasty threats.  When Ray gets arrested, Katie knows her time is limited to find the culprit.  As is she does not have enough on her plate, Janine Brady gives Katie three days’ notice that she is quitting her position as manager of Tealicious.  Thankfully, Nick knows a chef in need of a job.  Katie is quick to hire the handsome and talented Chef Brad Andrews.  Ray, though, is not as thrilled with the new addition to Katie’s staff.  Pick up Murder Ink to see how the story plays out.

Murder Ink by Lorraine Bartlett with Gayle Leeson the 6th A Victoria Square Mystery.  I had not read the previous books in A Victoria Square Mystery, and I felt I was missing some needed background information.  I believe this series is best if read in order.  Katie Bonner is strong, female entrepreneur.  She has Artisans Alley and now Tealicious plus she is the head of the Victoria Square Merchants Association.  I liked seeing Katie make a move for independence in one important aspect of her life (I do not want to spoil it for you).  Katie is dating Andy Rust who owns Angelo’s Pizzeria, but there are a few obstacles in the way of their happily ever after.  A big one is Andy’s assistant manager, Erikka who wants Andy for herself. Ray is attracted to Katie, but his daughters are openly hostile towards Katie.  Then there is the new chef at Tealicious who creates delectable items for the tearoom guests, is very kind, and looks like a movie star.  Katie has several romance possibilities if she is open to them.  I find the characters developed and realistic.  The death of Ken Fenton sends Katie on a merry chase.  When Detective Schuler focuses on Ray Davenport as the killer, Katie dons her investigator cap once again so she can find the true culprit.  The first order of business is learning more about Ken Fenton and his brother, Paul.  Katie is curious as to why Paul picked McKinlay Mill for his tattoo parlor.  There are a limited number of suspects in this whodunit.  The more Katie learns, the shorter the list becomes.  She also finds herself in harm’s way which adds suspense and excitement to the story.    I believe that the mystery touches on a subject that is topical and realistic.  I would have enjoyed a mystery that was slightly more challenging to solve.  But I did find it intriguing and there were interesting elements.  If people would only take their intelligence and creativity and use it for good instead of evil the world would be a different place.  I liked the authors writing style which made for a pleasing to read cozy mystery.  There is a lovely cozy feel to the story as Katie spends time with friends, boyfriend, working, investigating, reading, eating, baking and spending time with her cats.  Fans of A Victoria Square Mystery series as well as newcomers will be happy with Murder Ink.  Murder Ink is an engaging cozy mystery with a person with a predilection for peppermint, a terrifying tattoo artist, charming cats, a determined detective and romantic rivals. 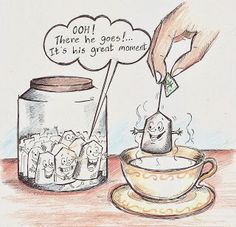 Murder Ink is available here* (Amazon UK) as well as other major booksellers (Barnes & Noble, iBooks, Kobo, BAM).  You find the other novels in A Victoria Square Mystery series here.  Thank you for dropping in.  I hope you return tomorrow because I am featuring The Amish Marriage Bargain by Marie E. Bast.  May you have an inspiring day.  Take care and Happy Reading! 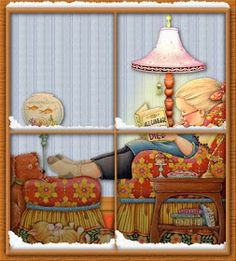