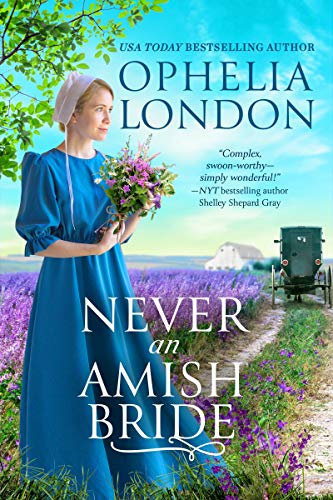 Welcome!  On June 25, The English Wife by Adrienne Chinn will be out and The Mountains Wild by Sarah Stewart Taylor releases June 23.  There are several new cozy mysteries coming out on June 30.  The titles include A Sprinkling of Murder by Daryl Wood Gerber (a new series), A Fatal Friction by Kaitlyn Dunnett, Game of Dog Bones by Laurien Berenson, Still Knife Painting by Cheryll Hollon, The Last Curtain Call by Juliet Blackwell, and Witch Hunt by Cate Conte.  Austin by Jennifer Beckstrand was supposed to come out on June 30, but the publisher has postponed its release (The Petersheim Brothers is such a delightful Amish series).  I will let you know when it is rescheduled.

Never an Amish Bride by Ophelia London has Esther Miller struggling two years after her fiancé, Jacob Brenneman died weeks before their wedding.  It has been worse lately because her younger sister, Sarah is getting married in November.  Esther tries to be good and find peace.  The one solace Esther has is making her soap which has become popular at Yoder’s Home Goods.  Sarah is heading to Yoder’s to deliver soap when she detours to the medical clinic where her Lucas Brenneman is working.  Lucas is Jacob’s brother and Esther hopes he can answer some questions for her.  Lucas has questions of his own.   Lucas left Honey Brook when he was sixteen, but he never told anyone the real reason for his departure.  Esther and Lucas begin spending time together and become friends.  They find they can tell each other things that they cannot share with anyone else.  Lucas finds himself falling for Esther.  He does not know, though, how they could be together when Esther is Amish and is unwillingness to give up his position as a physician’s assistant.
Never an Amish Bride by Ophelia London is the first novel in the Honey Brook series.  Honey Brook, Pennsylvania is a cozy town in Lancaster County.  Gossip spreads quickly in this small Amish town.  Esther Miller was to marry Jacob Brenneman two years ago, but he died a few weeks before their wedding day.  After Jacob passed, no one would talk about him or how he died.  Esther is struggling right now especially with her faith.  Esther’s younger sister, Sarah is getting wed in November and she has roped Esther into planning the event as well as sewing the wedding dress.  It is the last thing that Esther wishes to do.  Lucas Brenneman left town when he was sixteen on a mission and he returned six months ago.  He wonders about his family and if he has made the right choices.  I thought Never an Amish Bride was well-written with developed main characters.  The characters are realistic with their struggles involving family, faith, and tragedy.  The romance is sweet and progresses at a gentle pace.  I enjoyed the way they could talk to each other and their playful banter.  There is humor in the story and light moments that I enjoyed.  I love the three kids (baby pygmy goats) that were dressed in various costumes.  I could just imagine them in Christmas sweaters.  I loved the Anne of Green Gables references where Esther likens Lucas to Gilbert Blythe.  Esther made some wonderful soap.  I would not mind her clove soap myself.  I like how the soap played into Esther and Lucas’ romance.    I thought the author should have included a recipe at the end (or tips for making soap).  Never an Amish Bride is a delightful Amish story and I wish that we did not have to wait for spring for The Amish Cowboy’s Homecoming.  I appreciated the epilogue at the end.  Never an Amish Bride is a charming Amish tale with soap bar battles, a wayward wagon, plush pygmy goats, wedding woes, soaring scents, a dress dilemma.
Never an Amish Bride will be released on June 30 and can be obtained from Amazon*.  This is Ophelia London's debut Amish novel.  The next book in the Honey Brook series is The Amish Cowboy's Homecoming which will be out on April 27, 2021.   Thank you for stopping by today.  Tomorrow I am sharing Murder in Waiting by Lynn Cahoon.  It is the 11th A Tourist Trap Mystery.  I do hope you have a smashing day.  Take care of yourself and Happy Reading! 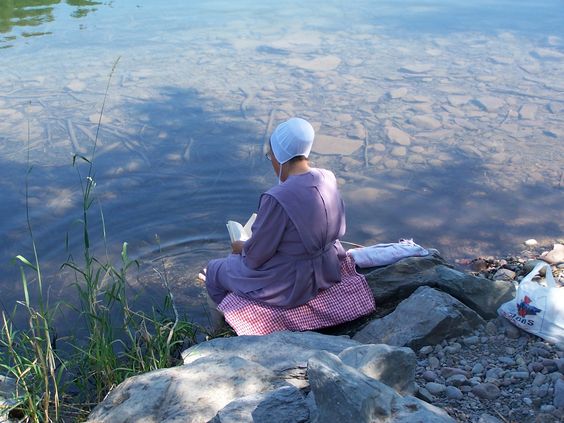