The Grim Reader by Kate Carlisle 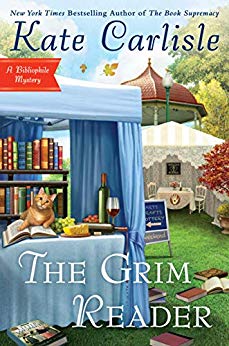 Happy Book Release Day!  There are a variety of new books out today that include:  Stories That Bind Us by Susie Finkbeiner, Rainy Days for the Harper Girls by Rosie Clarke, Deadly Sweet Tooth by Kaye George, Amish Generations by Kathleen Fuller, The Clutter Corpse by Simon Brett, A Gilded Lady by Elizabeth Camden, The Way of Love by Tracie Peterson, The Grim Reader by Kate Carlisle, What Momma Left Behind by Cindy K. Sproles, and Breaking Bat by Erin Johnson.  There is something for everyone on this list that includes Christian fiction, historical fiction, paranormal mystery, Amish fiction, and cozy mysteries.  Which one do you want to read first?
The Grim Reader by Kate Carlisle has Brooklyn Wainwright along with her husband, Derek Stone in Dharma, California for the town’s first annual Book Festival.  Brooklyn’s mother, Becky is co-chair of the festival committee with Lawson Schmidt.  One man, Jacob Banyan is unhappy with Becky not including him in the festival and has taken to threatening her.  Becky is no pushover and can hold her own against the bully.  Late one night, Brooklyn receives a call from her mother.  Becky and Derek’s mother, Meg are at the town hall where they found Lawson murdered.  They soon discover that the festival money has disappeared as well.  Jacob attempts to worm his way into the festival again, but he finds himself thwarted by Becky with help from Brooklyn.  Another late-night call finds Becky in the hospital after someone tried to run her down in town.  The whole family rallies to protect Becky while Brooklyn and Derek work at tracking down the nefarious killer
The Grim Reader by Kate Carlisle is the 14th A Bibliophile Mystery.  I have read each book in this entertaining series, but The Grim Reader can be read as a standalone (but, really, why would you want to).  I have enjoyed following Brooklyn from the very beginning.  Brooklyn Wainwright is a bookbinder who specializes in rare books.  She lives in San Francisco with her dashing husband, Derek Stone and their adorable cat, Charlie.  Derek and Brooklyn are in Dharma, Brooklyn’s hometown, for the first annual Dharma Book Festival.  This festival is featuring Little Women by Louisa May Alcott and will include a one-night performance of Little Women—the musical (it was performed on Broadway).  Brooklyn’s mother, Becky Wainwright is co-chair of the festival committee and she has been having a difficult time with Jacob Banyan.  Jacob has been acquiring wineries in the area by dubious means and turning their fine vintage into a box wine which has the other winery owners up in arms.  Jacob threatens Becky more than once in an attempt to get his way.  I like that all the women in the Wainwright family are strong and creative.  Brooklyn is a spitfire just like her mother.   The Grim Reader contains Kate Carlisle’s signature writing style which is engaging.  The story is narrated by Brooklyn.  I was quickly drawn into the book which moved along at a quick page.  The mystery was intriguing with a murder or two, an attempt on Becky’s life, and missing money.  While I narrowed in on my choice of killer early on, my interest did not wane.  I kept turning the pages quickly so I could see how the whodunit would play out.  The reveal scene was a delightful and creative.  It was quite a performance. The dialogue is witty and provided me with many laughs.  Brooklyn does a little book restoration in this story, but not as much as in other books.  I missed Brooklyn doing a creative, unique paper project.  Of course, Brooklyn is busy visiting family, preparing for the festival, keeping her mother safe, playing with Charlie, and repairing a first edition copy of Little Women.  There are some delectable culinary delights in this book that will have your mouth watering.  Thankfully, there are recipes at the end of the book.  There are some great tidbits regarding Little Women in the book.  The Grim Reader is a story that takes me on a journey into Brooklyn’s world that I was sad to see end.  I cannot wait for the next A Bibliophile Mystery to come out next year.  My favorite line comes from Brooklyn when she said, “Couldn’t we stumble across a poisoning once in a while.”  Poor Brooklyn has an aversion to blood.  One of Brooklyn’s other lines that had me laughing is, “So suck it up buttercup.”  The Grim Reader is a compelling cozy mystery with a big bully, committee chaos, beaucoup blood, missing money, a bounty of books, and a fun festival.
The Grim Reader is available from Amazon*.  You can find the other titles in A Bibliophile Mystery series here.  Kate Carlisle also writes A Fixer-Upper Mystery series starring Shannon Hammer (on Hallmark Movies & Mysteries channel).  Premeditated Mortar releases on December 1.  Thank you for reading my review today.  I will be back tomorrow with The Promise by Patricia Davids.  It is the 3rd novel in The Amish of Cedar Grove series.  I hope that you have a creative day.  Take care, stay safe, and Happy Reading! 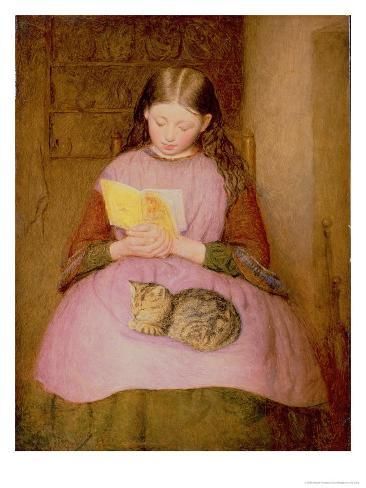