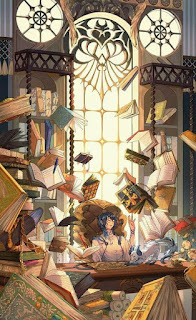 About Bait and Witch 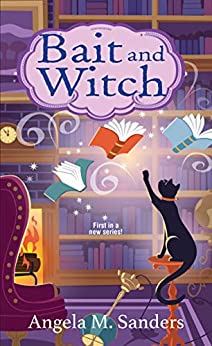 Librarian Josie Way moved to small-town Oregon to lay low. Instead, thanks to newfound magic abilities—and a killer on the loose—she’s leapt out of the frying pan and into a cauldron of trouble . . .

Josie Way loved working among the Library of Congress’s leather-scented stacks—until she uncovered corruption and made herself a target. As Wilfred, Oregon’s new librarian, Josie can stay undercover until the case goes to court. But life in this little town isn’t as subdued as she expected. The library, housed in a a Victorian mansion, is slated to be bulldozed. Still digesting the news that her safe haven is about to become scrap lumber, Josie discovers a body in the woods . . .

Almost as shocking, Josie learns that she’s descended from a long line of witches—and her powers have suddenly sprung to life. With help from a spoiled alley cat who just may be her familiar, Josie’s thumbing through a catalog of suspects, hoping she can conjure a way to save her library—and her life . . . 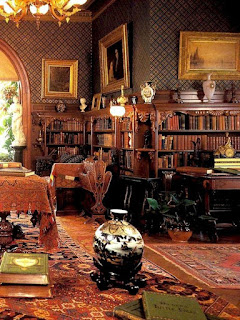 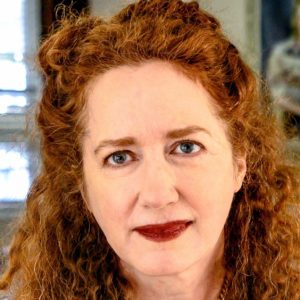 Angela M. Sanders writes the Amazon bestselling Joanna Hayworth Vintage Clothing Mysteries and The Booster Club Capers. Under the pen name Clover Tate, she’s the author of the Kite Shop Mysteries (Berkley), which Romantic Times praised for their “well written wit and intrigue.” Angela’s articles on food, personalities, and perfume have appeared in a variety of magazines, and her monthly newsletters have nearly 2,000 subscribers. She interacts with readers on Facebook and Instagram and is a prominent blogger for Now Smell This, which garners 1.5 million monthly page views. Angela has two cats—one of whom is black of course—a witch’s freckle in her left eye and learned to read tarot cards from a pagan priestess. 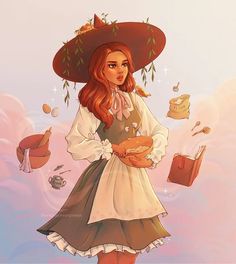 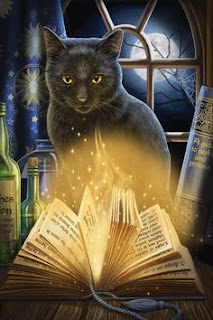 Bait and Witch by Angela M. Sanders is the delightful debut of A Witch Way Librarian Mystery series.  Josie Way has been working at the Library of Congress.  She is having lunch in a basement room with her co-worker and friend when they overhear two men plotting corruption.  They report what they overheard, and the FBI becomes involved.  The next day Josie’s co-worker has vanished which has Josie and his wife worried.  Josie decides to lay low and takes a position as librarian in Wilfred, Oregon.  The next day, Josie learns that beautiful Victorian the library resides in may be sold which means she will be out of a job as well as a place to live and a hiding place.  Later that day, Josie takes a walk in the woods and finds a murdered woman.  Josie has always felt a kinship with books, but she begins to notice some odd things after beginning her new job.  Its almost as if the books are talking to her.  That cannot be possible or can it?  Bait and Witch is a fun story to read.  I liked the interesting cast of characters that includes the library staff, town residents, Josie’s family, Rodney, the library cat.     I liked getting to know Josie and look forward to seeing what happens with her next.  The author has a casual writing style that makes this cozy mystery easy to read.  The book moved along at a good pace and we are given vivid descriptions of Wilfred, the library, the shops, and its residents.  I especially loved the descriptions of the Victorian the library resides in.  There is humor scattered throughout the story along with mystery, friendship, suspense, family, and a touch of romance. The mystery was not the focus of the book in the beginning.  It becomes more prominent as the tale progresses.  There is a red herring, a couple of suspects, and helpful clues.  Bait and Witch is a cute cozy mystery with a paranormal twist.  The author came up with some fun paranormal elements.  I thought a book witch was a wonderful concept (great opportunities for book references).  I am looking forward to reading Seven-Year Witch when it comes out in August.  Bait and Witch is a diverting tale with a clever cat, a secretive man named Sam, Roz’s curious project, rampant rumors, political corruption, babbling books, and witchy wonders. 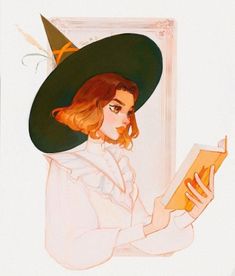 We climbed a narrow staircase, Lyndon hefting my suitcase over his shoulder like a sacrificial goat. The hall was cold and smelled of beeswax. Two flights up, he extracted a ring of keys from his Levi’s and unlocked the door. He set down the suitcase.

We stood in a hall that looked over the old house’s central atrium, open all the way to the third-floor ceiling.

A stained-glass window set in the roof glowed dull red and blue with moonlight. Below us, two floors of shadowed rooms that must have once been the house’s bedrooms and parlors held bookshelves. 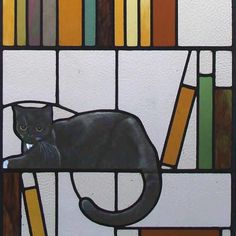 “Here we have the living room,” he said.  I stuck my head into a dark room with mullioned windows and the dim shapes of a sofa and chairs.

“Next is the bedroom.” He waved his hand toward the next door, closed, but made no move toward invading those quarters.

“Here’s the kitchen. Not too large, but plenty big for you, I reckon.” The bloated form of a midcentury stove was all I could make out in the dark. Lyndon turned to examine me as if for the first time and drew his bushy eyebrows together. “You feeling okay? You seem kind of jumpy.”

“I’m fine,” I lied. We moved on.  “The bathroom.” The mint-green bathtub and sink clearly hadn’t been updated since the Eisenhower administration. “Here are the keys. I’ll show you more once you get settled in.” He touched the brim of his hat and disappeared down the hall. After a moment, I heard the door shut and the solid thunk of a bolt thrown in place.

Well.  The apartment was quiet but for the faraway sound of crickets. I rolled my suitcase to the bedroom and clicked on the lamp on the dresser. Pale light showed an armchair and a bed with an elaborately carved headboard that stretched nearly to the ceiling. Someone had left a jug of wildflowers on the dresser, a reassuring note. 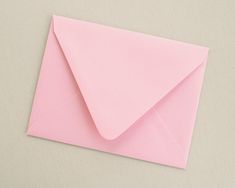 A pink envelope next to it was labeled “Josephine Way.” I opened it to find a handwritten note from Darla Starling, the woman who had hired me by phone.

“Dear Josie,” it read in a girlish hand, each letter painstakingly formed. “Welcome to Wilfred. I hope you find your rooms comfortable—we changed the sheets, and there are fresh towels in the bathroom. We’ll see you downstairs at nine tomorrow morning. I look forward to meeting you in person. Sincerely, Darla.” A banner reading SWEET GEORGIA PEACHES ran across the stationery’s edge.

I crossed the room to the window to draw the curtains and stopped short. Amber eyes stared back. It was a black cat, perched on the roof outside my window. I wasn’t being watched, I reminded myself. No one knew I was here. They couldn’t. It was just a cat. 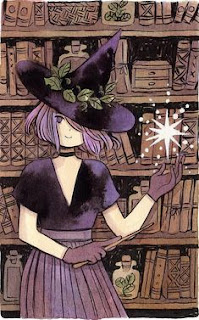 Are you ready to read Bait and Witch?  Bait and Witch can be purchased from  Amazon, B&N, Kobo, Google Play, and IndieBound.  The next A Witch Way Librarian Mystery is Seven-Year Witch which comes out August 24.  You can find Angela M. Sanders' other novels here.   As part of the tour, Angela M. Sanders is giving away five (5) print copies of Bait and Witch (sorry, but US Only).  You can click here to enter or use the Rafflecopter form below.  Do not forget to leave a comment for an extra entry. Good Luck!  Thank you for joining me today.  I will be back tomorrow with my thoughts on The Amish Winter by Vannetta Chapman and Carrie Light.  I hope that you have an enchanting day.  Take care, be kind, and Happy Reading! 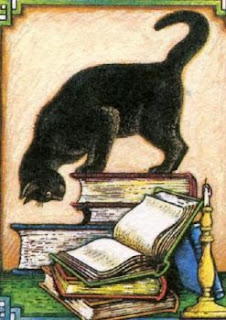 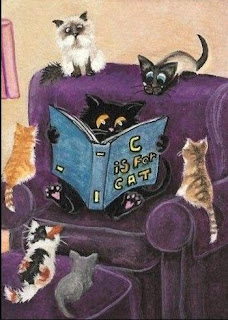 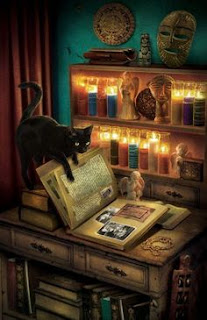