Revealed: Intrigue Under Western Skies plus a Giveaway!

Good Day!  Elaine Manders writes wholesome Christian romance and suspense about the bold, capable women of history and the strong, dependable men who love them. Her stories twist, turn, and surprise, told by characters who aren’t afraid to show their love for God and each other. She grew up a small town country girl and now lives in Central Georgia with her fur baby. Besides writing, she enjoys reading, sewing, crafts, and spending time with her family.  The greatest insight that Elaine has learned from her writing is that one can never trust his own heart without first trusting God. 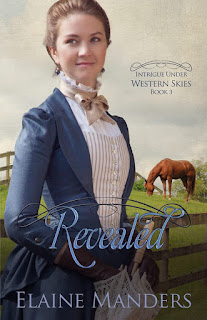 When her father dies, Katherine Levinson discovers her parents have kept secrets that render her happy childhood a farce. She and her gravely ill mother face eviction, and she has no choice but to appeal to the brother she’s never seen, the famous cattle baron, Rhyan Cason. Over her gravely ill mother’s objections, they move to Nebraska and the sprawling cattle ranch, Sollano.

Instead of the warm welcome Katherine expects, she and her mother are met with whispers and scorn in the little prairie town near Sollano. Gradually, the sins of her parents’ past surface, and Katherine begins to doubt her very identify. With her brother busy with cattle rustlers and her mother too ill to be bothered, Katherine turns to Colt Holliman, a soft-spoken neighboring rancher, for comfort.

Tired of waiting for the right woman to come along, Colt has promised to wait for Charley Ryder, an acclaimed female sharp shooter and equestrian acrobat with the Wild West Show, but it’s becoming clear Charley loves the show more than him. As his attraction to Katherine grows, he finds himself spiritually conflicted. How can he break from past commitments and follow his heart?
Then unexpected danger strikes, testing Katherine’s and Colt’s faith in God—and each other.

Revealed by Elaine Manders is the third novel in Intrigue Under Western Skies series.  It is 1885 in Charleston, South Carolina where Katherine Levinson is running out of options.  Since her father’s death, Katherine has been responsible for her ill mother, Arabella and they are out of funds.  Despite her mother’s objections, Katherine writes to the brother she has never known, Rhyan Cason.  Rhyan and his wife, Carianne quickly arrive and bustle the pair off to their ranch, Sollano in Westerfield, Nebraska.  The townspeople have long memories and they have not forgotten Arabella’s treatment of Rhyan’s father and her scandalous behavior.  A couple of the ladies are welcoming to Katherine and Arabella, but many of them are discourteous and help fuel the flames with rumor and innuendo.  Colt Holliman own the ranch next to the Cason’s and is Rhyan’s best friend.  He is engaged to Charley Ryder, a trick rider and sharp shooter with Carianne’s Wild West Show.  However, Charley is reluctant to set a wedding date as she enjoys all the attention and acclaim.  Colt is taken with Katherine’s gentle personality and they find themselves drawn to each other.  The ranchers are having trouble with rustlers taking off with their cows and horses.  But what happens when the culprits up their game by taking something very dear and valuable?

While Revealed is the third novel in Intrigue Under Western Skies, I had no trouble reading it.  I do think, though, that I would have known more about the characters if I had read the previous two books in this series.  I thought the book was well-written, had a steady pace throughout, and smooth transitions.  I rarely read books set in the west, I admit to enjoying this one.  I liked reading about the Wild West Show and Charley’s tricks.  Can you imagine doing acrobatics on top of a horse while wearing a fancy costume?  I found the characters to be well-developed and realistic.  It was nice to see how Arabella changed after reuniting with her son.  The Christian elements are woven throughout the story.  It is prevalent, but it does not dominate.  It can be hard to keep your faith during times of strife. We need to remember that God is there for us always and we need to pray for His assistance as well as His guidance.    We also see our characters struggle with forgiveness and not being judgmental.  I had a little trouble getting into the story, but it did not take long for my attention to be grabbed.  I am glad that the author had the mystery and suspense elements into the book.  They added depth and made for a complex story.  While I knew who was behind the crimes, I kept reading to find out what would happen next (I stayed up very late).  My rating for Revealed is 4 out of 5 stars (I liked it).  This was the first book I have read by Elaine Manders, but it will not be my last. Revealed is available on Amazon and is on the Kindle Unlimited Program.  The first two books in Intrigue Under Western Skies series are Pursued and Surrendered.

To celebrate her tour, Elaine is giving away a $50 Amazon Gift Card.  Before you leave to enter the contest, please leave a comment on my blog to get nine (9) extra entries.  Click here to enter.  Good Luck!  Thank you for stopping by today.  I will feature Betty Church and the Suffolk Vampire by M.R.C. Kasasian.  It is a unique book (and it is not a paranormal novel).  Please take the time to visit the other stops on the Celebrate Lit Revealed tour (see schedule below).  Have a beautiful day and Happy Reading!