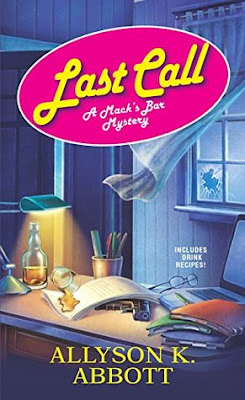 Welcome!  The Trouble with Truth by Kathy Krevat comes out on August 28 along with The Mending by Susan Lantz Simpson.  Deadly Dram by Melinda Mullet publishes on September 4 along with Die Me A River by Denise Swanson.

Last Call by Allyson K. Abbott is the sixth A Mack’s Bar Mystery.  Mackenzie “Mack” Dalton has been asked to be a consultant for the Milwaukee Police Department. Her synesthia has helped solve several recent cases and Duncan Albright calls her his secret weapon.  Duncan is called out to a murder scene and Mack joins him for her first consulting gig. They find Sheldon Janssen dead from a gunshot wound and his little girl hidden in a secret room.  Mack is surprised to discover that the little girl, Felicity has undiagnosed synesthia.  Mal O’Reilly’s blood and fingerprints are found at the scene, but no one can find him.  It turns out that Mal was working undercover at Wade Klein’s construction company and Janssen was Klein’s right-hand man.  They do not know if Mal has been badly injured or if his cover has been blown?  Sonja, a Capone Club member, brings the group a case to solve.  Caroline Knutson has been griping about her husband for quite some time, and suddenly Oliver turns up dead.  Instead of grieving, the widow is updating her look at the salon with a pleased countenance.  Mack and Duncan team up with the lead detective, Roberta Dillon to make sure Oliver did not have help getting to the great beyond.  As if Mack does not have enough to keep her occupied, the O’Reilly clan is working on the bar’s elevator and, to keep them safe, they have moved into her apartment.  Come along to Mack’s Bar, pull up a stool, grab a bite to eat along with a refreshing beverage and help the group solve the two crimes in Last Call.

Last Call may be the sixth novel in A Mack’s Bar Mystery series, but it can be read alone.  The author summarizes the first five books in the series (the cases in each one).  We learn about Mack’s synesthesia, how she inherited the bar, the Capone Club, updates she has made to the bar, and her relationship with Duncan.  If you have not read the other books, it will spoil it them you. However, it is has been a while since you read a book in A Mack’s Bar Mystery, you might find it helpful.  I thought the story was nicely written with steady pacing throughout (for the most part).  I did feel that the frequent explanations of Mack’s synesthesia interrupt the flow of the story.  It is obvious that the author did her research on synesthesia from the way she presents the information and the amount of detail included. The two crimes were interesting, but they were not complex.  The way one of the murders was executed was unique and clever.  There are good clues to aid readers in solving the cases before the solution is revealed.  The members of the Capone Club are mentioned in the book, but we spend little time with them.  It can be difficult to keep all the characters straight (there are so many with the bar employees, Capone Club, O’Reilly family, police officers).  I thought the ending was sweet and romantic.  A majority of Last Call felt like filler.  I would have preferred the author focus on one murder mystery.  The way Last Call ended makes it seem as if it is the last book in A Mack’s Bar Mystery series.  My rating for Last Call is 3 out of 5 stars.

Allyson K. Abbott also writes under Annelise Ryan (A Mattie Winston Mystery series).  Thank you for visiting me today.  I will be sharing my review of A Love for Leah by Amy Lillard next time.  I sincerely hope you have a day without conflict.  Take care of yourself and Happy Reading! 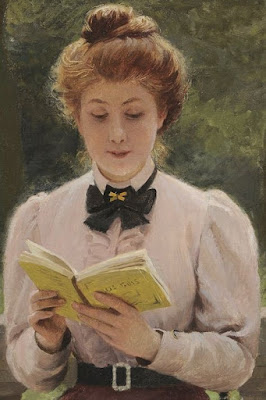