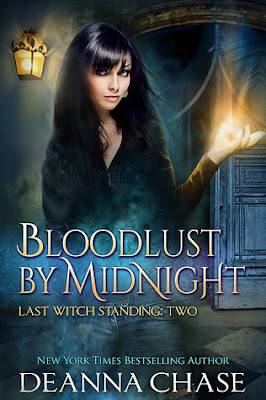 Greetings!  Premeditated Peppermint by Amanda Flower and Christmas Cake Murder by Joanne Fluke come out on September 25 along with Silver Anniversary Murder by Leslie Meier.  I am looking forward to reading each one of them.

Bloodlust by Midnight by Deanna Chase is the second novel in Last Witch Standing series.  Phoebe Kilsen, witch and vampire hunter for the Void, is heading for the Arcane library to pick up some research from swamp witch, Simone Bernard.  After dealing with a vampire who decided to get too close, Phoebe arrives at the library to find Simone injured and clutching a neon green syringe in her hand.  The deadly drug, Scarlet has been harming and killing shifters including Leo’s girlfriend, Rhea.  After obtaining help for Simone, Phoebe is summoned to Director Halston’s office.  The director explains that the drug has been altered to prey on shifters.  She wants Phoebe and her partner, Dax Marrok to round up the living victim’s before they harm others.  Dax texts that he has information on Phoebe’s missing brother, but before he can provide details he is attacked with the toxic Scarlet.  Phoebe needs to find the culprit behind these dastardly deeds and procure a cure before it is too late.  Will Phoebe be able to rescue Dax?  What happened to Phoebe’s brother?

Bloodlust by Midnight is best read after Soulless at Sunset otherwise you will be confused in the beginning.  The book is well-written with a fast pace.  You will be on the edge of your seat as Phoebe races against time to save Dax and the other affected shifters.  She is worried about her missing brother, but Phoebe knows that she must prioritize (no matter how much she wants to chase down the lead on her brother).  There are vampires, witches, shifters and humans in this paranormal adventure.  Phoebe needs to find out who is behind the deadly drug while keeping an eye on Dax (the drug has terrible side effects).  Phoebe is a strong, smart female character who will do what it takes to protect those she cares about and the members of the paranormal community.  Dax and Phoebe are a good pairing.  You can feel the chemistry between them.  I do want to warn readers that the story contains foul language and the intimate scenes are descriptive.  My rating for Bloodlust by Midnight is 4 out of 5 stars.  I thought the ending to be clever and humorous.  It will leave readers dangling and desperately wanting the third book in the Last Witch Standing series.

Spirit of the Witch is Deanna Chase's next novel and the third in Witches of Keating Hollow series.  It will be released on September 25.  Thank you for taking the time to visit today.  I will be sharing my review of Blessed Be the Wicked by D. A. Bartley on Monday.   Have a satisfying day and Happy Reading! 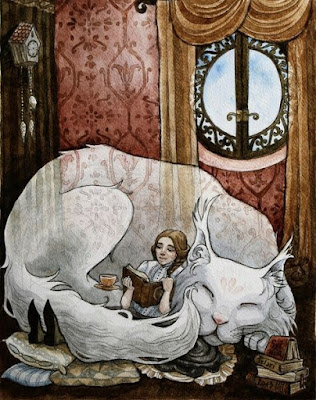