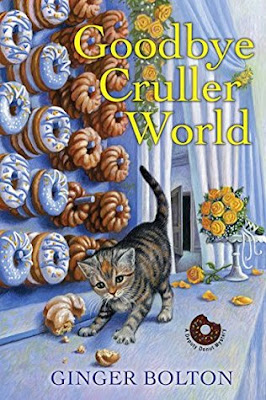 It is hard to believe it is the last day of August.  The month went by so quickly for me.  A Christmas by the Sea by Melody Carlson will be available on September 4 along with The First Love by Beverly Lewis and A Deadly Brew by Lynn Cahoon (this is a novella).

Goodbye Cruller World by Ginger Bolton is the second tale in A Deputy Donut Mystery series.  Emily Westhill and Tom Westhill co-own Deputy Donut in Fallingbrook, Wisconsin.  Their shop has been commissioned by Jenn Zeeland, who owns Dressed to Kill, to provide a late night snack for her wedding guests at her wedding reception.  They have constructed a donut wall (with dowels to hold the donuts) and Tom’s wife, Cindy added some decorative touches.  At Little Lake Lodge, Emily puts out the fresh donuts and they are an instant hit (who doesn’t love freshly made donuts).  Emily is being twirled about the dance floor when the groom is discovered curled up on the carpet by the donut wall.  Scott Ritsorf, the fire chief, attends to the victim while Emily notices a saucer with a strange white substance hidden under her hat.  It appears that someone used Deputy Donut’s crullers to poison the groom.  Unfortunately, the groom does not survive and the police chief calls in DCI to work the murder.  When Detective Yvonne Passenmath is assigned the case, Emily knows she needs to track down the poisoner to save Deputy Donut’s reputation.   When Detective Passenmath narrows her investigation to Jenn, Emily needs to work quickly before Jenn must trade her wedding dress for a prison jumpsuit.

Goodbye Cruller World can be read on its own.  The author provides the necessary backstory on Emily and the secondary characters along with what occurred in Survival of the Fritters.  I found the book to be easy to read and I liked the steady pace.  However, we really do not need every activity described in detail (unlocking the shop doors, turning on the lights, making the coffee, wiping down the tables, etc.).  The author needs to take the time to develop the characters in the series.  They are not fleshed out and the secondary characters felt flat.  I like Misty, Samantha, Scott, Brent, Tom and the others.  I just wish we knew more about them.  I could do with Emily spending less time trying to match up her various friends (as she avoids dating and the fact that two men would like to date her).  Dep, the cat, is adorable and playful.  I like that the author has Emily talk to Dep and he responds with his little “mmp” noise.  I did not understand why other characters, like Brent, would answer with a “mmp” though.  I would re-read the paragraph because I wondered if I had missed something (was it a person talking or the cat).  The mystery could be solved before the bridegroom consumes his first cruller.  The killer was as obvious as powdered sugar on a black shirt.  Emily does ask questions, but she spends an inordinate amount of time speculating on the crime with Dep (I want more solid content). I like that Brent listens to Emily’s insights and the information that she digs up on the suspects.  I intensely dislike Detective Yvonne Passenmath.  She is another cliché nasty detective who focuses on finding evidence to convict innocent people instead of following the evidence to find the guilty party.  I would like to know more about the town of Fallingbrook.  We are given scant details on this little hamlet in Wisconsin.  There are delectable donuts described in the story and recipes at the end of the book. Goodbye Cruller World is an easy breezy cozy mystery that will have you making a run to your local donut shop.  I am giving Goodbye Cruller World 3 out of 5 stars.

Survival of the Fritters-kindle edition-(first book in A Deputy Donut Mystery series) is currently on sale for $1.99 (at least it was when I wrote this posting).  Thank you for visiting today.  I hope you day is filled with brightness.  I will be sharing my review of The Mending by Susan Lantz Simpson tomorrow.  Take care, enjoy the day and Happy Reading! 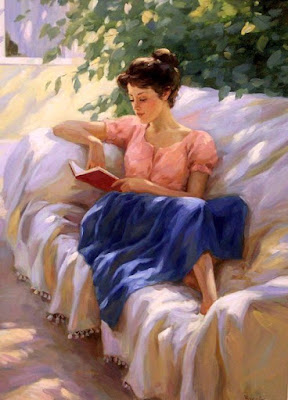