The Girl on the Doorstep: A Black Country Novel 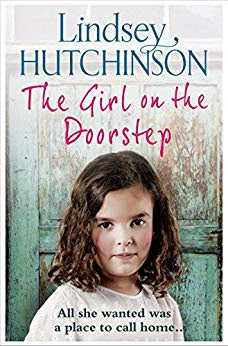 Good Day!  Lindsey Hutchinson lives in Shropshire with her husband and dog.

Lindsey loves to read and has recently discovered photography.  She is the daughter of author Meg Hutchinson.  Lindsey has written The Workhouse Children, The Lost Sisters, The Orphan Girl, and The Wives' Revenge.  Her next novel is set around an orphanage in 1890 and involves two siblings (a boy and a girl).  You can connect with Ms. Hutchinson on Twitter @LHutchAuthor and on Facebook.

The Girl on the Doorstep by Lindsey Hutchinson is the fifth book in A Black Country Novel series.  Rosie Harris is crying on her doorstep in Wednesbury when she is found by Maria Valesco, a Romany gypsy.  Rosie’s mother has just passed away and she has no other relatives.  Maria takes in Rosie and teaches her the gypsy ways.  Thirteen years later, the pair return to Wednesbury for the annual The Gathering. It is the time when the younger generation find their life partner.  Rosie does not participate that year much to Jake Harding’s dismay.  Rosie is fortunate to make the acquaintance of Margy Mitchell, a cut-rat.  When Maria passes away, Rosie needs to find a new home and Margy offers her one aboard their boat.  Rosie, who has second sight, traverses the waterways with the Mitchell’s and provides readings to folks to earn a living.  When Margy’s son, Bill along with his twin sons leave home to return to his roots, Rosie departs the Mitchell’s boat.  She joins Betty on her boat since she can no longer manage on her own and eventually buys that boat.  All this time, Jake Harding keeps an eye on Rosie since he is determined to make her his wife.  However, Rosie’s heart is taken by another.  While Rosie can see the future for others, she cannot see her own.  What does the future have in store for Rosie?  Return to the Black Country for Rosie’s journey in The Girl on the Doorstep.

The Girl on the Doorstep is an absorbing historical novel (I was up quite late finishing it).  Rosie is a friendly main character who possesses the sight.  The secondary characters are equally delightful.  Margy is quite a character and Sarah, Bill’s wife, is an individual that you will love to hate.  I thought the book was well-written and had gentle pacing.  It was interesting to find out more about the gypsy lifestyle as well as the “cut-rats”.  Before trains and trucks took over transporting goods, items were shipped along the canals in England.  Their boats were their whole life.  It provided their livelihood as well as a place to live, entertain and raise their family.  I like how the “cut-rats” looked out for each other.  Life is full of ups and downs as we see in The Girl on the Doorstep which is a story about the working class.  I enjoyed the interactions between the characters as well as their can-do spirit, courage, and generous natures.  There are good life lessons presented throughout the book and I liked the variety of characters.  Lindsey Hutchinson did not disappoint with The Girl on the Doorstep.

Here is an extract of The Girl on the Doorstep:

It had been thirteen years since Rosie Harris had seen her home town of Wednesbury in the heart of the ‘Black Country’. Looking around her from the seat of the gypsy vardo, she guessed nothing much had changed. Then she remembered it was Queen Victoria’s Diamond Jubilee soon and the townspeople would be in high spirits in anticipation of the celebrations. To celebrate, the streets would be decorated with bunting and flags and parties would be held where copious amounts of alcohol would be consumed. Everyone in their particular street would contribute what food they could manage, to be laid out on long trestle tables placed in the centre of the roadway. Music would echo its way between the buildings and folk would kick up their heels to its beat. Rosie smiled as she traversed the heathland known as Lea Brook. She kept her eyes peeled for the old disused coal shafts and guided the horse towards the Monway branch of the Birmingham Canal which bordered two sides of the massive triangle of waste land. The railway line curved around the Lea Brook side. They would stop over for a while in the hope of selling their wares, although she didn’t hold out much hope, for everywhere they stopped they were moved on the following morning by the council authority. Nowhere wanted gypsies around; people were afraid their children would be kidnapped or their houses ransacked and their goods stolen. Rosie clucked gently to the horse wondering for the hundredth time where people got these mad ideas from.

Nearing the towpath of the canal, Rosie tugged gently on the reins pulling Samson to a standstill. Jumping nimbly to the ground she began to unhitch the horse from the vardo, and tethered him to a nearby tree, leaving a long rope to enable him to graze further afield. Her ears picked up the sounds of the ‘cut-rats’, the canal people, working their barges and narrowboats nearby. Her eyes caught glimpses of people staring and she waited for the inevitable shouts and jeers as she began to collect stones for a fire ring.

Setting the fire, Rosie called to the woman in the caravan. ‘Maria, fire is burning – time for tea.’  The dark head of Maria Valesco popped through the top of the split door at the back of the wagon. Climbing down Maria joined her young friend who was setting the kettle to boil on the iron trivet stood over the fire.
Looking around Rosie said, ‘No point in getting settled as I’m sure we’ll be moved on before long.’ Maria stroked the girl’s long dark hair and smiled. ‘It’s the life, my lovely, the Romanies are feared so we are pushed away. You know this as well as I do.’ ‘I do, Maria, but sometimes I wish they would just accept us as we are – travellers.’ ‘Don’t think on it, Rosie. Let’s eat before the darkness descends, then we shall see what the morning brings.’

Cooking their food in a frying pan on the iron trivet now relieved of the kettle, Rosie looked up to see a woman standing before her. She was dressed in an old long skirt and cotton blouse, her shawl wrapped around her shoulders. Her brown hair was pulled into a loose bun at the back; her blue eyes twinkled and she was slightly overweight which made her pant after the walk across to them.
‘I thought this might sweetin yer tea,’ she said proffering a jug of milk.  ‘Thank you,’ Rosie said as she accepted the jug and invited the woman to sit on a three-legged stool near the fire. Tea with milk was shared as the three women chatted quietly.  ‘We thank you for your kindness, it is rarely given to the likes of us,’ Maria said.  ‘Nor us, the “cut-rats” I mean,’ the woman replied. ‘My name is Margaret Mitchell; friends call me Margy.’ She lifted her tin mug in a salute which said for them to call her by her nickname.

Rosie introduced Maria and herself before saying, ‘It never ceases to amaze me how the general populace tars us all with the same brush because of a few rogues.’  ‘It’s the way of the world, gel,’ Margy muttered. ‘We’ll be movin’ along in the morning and I suggest you do the same.’ She indicated the direction of her narrowboat with a tilt of her head.  ‘Yes, I think you could be right, Margy. We should get going before the townspeople descend on us in anger,’ Maria said as she stared into the fire contained within the circle of stones.  ‘Maria, we can’t – not yet!’ Rosie said, consternation etching her voice.

Maria sighed loudly. ‘I know what you are thinking, Rosie, but I must keep us safe while we wait.’  ‘What yer waitin’ for?’ Margy asked, dying to know what was going on.  Maria and Rosie exchanged a glance before saying in unison, ‘The “Gathering”.’  ‘What, ’ere in Wednesbury?’ Margy gasped. She had heard of this whilst on her travels on the canal. Seeing Maria nod, she laughed loudly. ‘Oh bloody ’ell! I’ll bet that will lead to trouble.’ ‘It may, though I wish for no trouble with the town. The “Gathering” is a time for travellers to come together so our young ones can choose a life partner,’ Maria said with a nod. ‘I can see as ’ow that’s important. It ain’t like you can marry outside of yer clan so-to-speak,’ Margy ventured.

‘Oh we can, Margy, but rarely does this happen. However, people do not understand our ways; they think we are here to cause upset and unrest. That is not, nor has it ever been, our intention.’ ‘Ar well, us “cut-rats” have much the same reception from folk when we moor up. They ain’t got no time for us.’ Margy shook her head sadly as she stood to return to her boat. ‘Good luck to yer both,’ she said but as she turned to leave, Maria called her back. ‘Give me your hand, Margy Mitchell.’ Retaking her seat, the woman did as she was bid. She watched as Maria took her hand in her own. Tracing a finger along the lines of Margy’s palm her voice was barely more than a whisper.

The Girl on the Doorstep is available at Amazon (and on the Kindle Unlimited Program), iBooks, Barnes and Noble, Google, Bookbub and Kobo.  I appreciate you visiting me today.  I am taking Sunday off this week.  I will return on Monday with my review of A Thief Revealed by Heather Sunseri.  It is the first novel in the International Thief series and it will be out on Tuesday, August 14.  I hope that you have a lovely weekend.  Take care and Happy Reading! 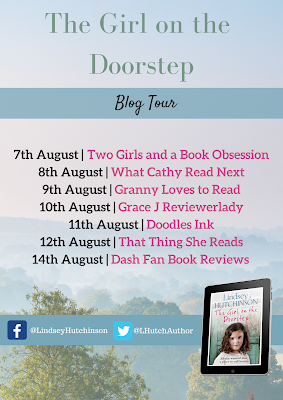 Facebook: @Lindsey Hutchinson
Posted by Kris Anderson, The Avid Reader at 12:00 AM