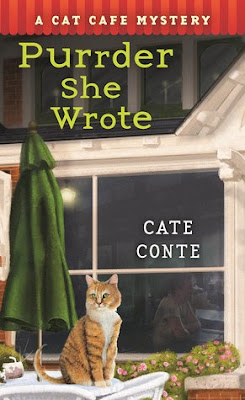 Felicitations!  A Thief Revealed by Heather Sunseri is the first book in her new International Thief series.  It will be out on August 14.  The Christmas Prayer by Wanda Brunstetter releases on August 15. For those who enjoy crafty cozy mystery, check out A Crafter Knits a Clue by Holly Quinn.  The first book in A Handcrafted Mystery series and it comes out on October 9.  It is time to start hinting for Amazon gift cards for Christmas!

Purrder She Wrote by Cate Conte is the second A Cat Café Mystery.  Maddie James is having the grand opening of JJ’s House of Purr’s, a cat café, on Daybreak Island.   It is a chance for people to spend time with adorable felines and enjoy a snack at the same time.  It is Maddie’s goal to find loving, stable homes for the cats in her care.  The first day gets off to an explosive start when volunteer, Adele Barrows gets into an altercation with Holly Hawthorne.  Holly wishes to adopt a cat and Adele has no intention of letting Holly get her claws into another innocent feline.  Before Maddie ends up with a cat fight on her hands, she diffuses the situation.  That evening Sgt. Mick Ellory stops by asking about the shop’s signature cat toys which are made by Adele and exclusive to JJ’s House of Purr’s.  Unfortunately, someone used them to silence Holly forever.  With Adele at the top of the suspect list and the shop the subject of hot gossip, Maddie, with the aid of Grandpa Leo, digs into the case.  She will need to work in her investigating in between handling the café, spending time with her new boyfriend, listening to Ethan’s new ideas for the café’s kitchen, handling the hospital gala for her father, delivering for the new Pet Meals on Wheels program and dealing with her sister’s marital woes.  Maddie will need to work in a cat nap or two if she is to keep up with her responsibilities.  She will need to be stealthy in her investigation or Maddie may use up the last of her nine lives.

Purrder She Wrote is easy to read and has a steady pace.  There is a lot going on in this book.  I do not quite understand why the author felt the need to jam so much into one story.  I would prefer she take the time to fully flesh out her characters.  I would like to know more about Grandpa Leo and have him take a more active role in the investigating.  I also could do with less of Maddie’s father who comes across as self-centered.  He cares more about how events affect his career than his family.  There was a great Emily Gilmore (of Gilmore Girls) reference in the book as well as one referring to Lord Voldemort.  It was clever how the author included Stan and her pet treats from the Pawsitively Organic Mystery series.  The whodunit was straightforward, and readers will have no problem identifying the guilty party.  Maddie was intensely focused on solving the crime.  She went from suspect to suspect to obtain information and kept in touch with her contact at the local newspaper for the latest news.  There is speculation, rumors, and red herrings.  I do wish that the case had been solved differently by Maddie (I would say more but I do not want to spoil it for you).  There is some mild foul language in the story.  Maddie is dating local pet groomer, Lucas Davenport but an old beau is also trying to capture her attention.  Personally, I prefer the old beau over Lucas.  I would prefer the romance to be less prominent in future books.  I enjoyed the descriptions of the adorable felines and their antics.  However, we do not need to know how often or when the litter boxes are scooped (no matter how necessary the chore).  The cat café concept is unique, and I had not heard about them until I read Cat About Town (you should look it up online to see the various designs).  While Purrder She Wrote is the second novel in A Cat Café Mystery series, it can be read alone.  My rating for Purrder She Wrote is 3 out of 5 stars.

Thank you for reading my review.  Next time I am reviewing A Simple Singing by Leslie Gould.  The second novel in The Sisters of Lancaster County.  I hope that you have a fulfilling day.  Take care, stay cool (I am grateful for whoever invented air conditioning) and Happy Reading! 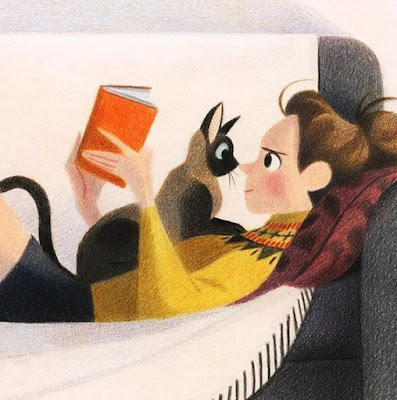