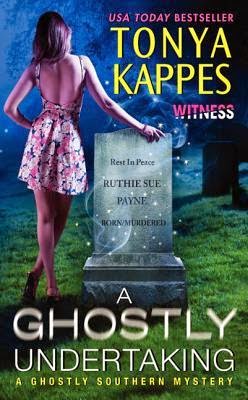 A Ghostly Undertaking by Tonya Kappes is a cute and funny paranormal mystery story.  Emma Lee Raines runs the Funeral Home with her sister, Charlotte.  Charlotte handles the sales and Emma Lee takes care of everything else.  Business has been a little slow since Emma Lee was hit on the head with a plastic 5’ Santa Claus.  It fell off the roof the deli and hit her on the head.  When she woke up at the hospital, she could see Chicken Teater who died several years ago.  Doc Clyde called it “funeral trauma” from working with dead people (in other words he thinks she is hallucinating and needs medication).  Sleepy Hollow being a small town everyone knows about Emma Lee’s “funeral trauma”.

On the day of Ruthie Sue Payne’s viewing, Emma Lee sees Ruthie Sue (wearing hot pink pajamas and kitty cat slippers).  It is believed that Ruthie died falling down the stairs, however, Ruthie states she was pushed.  Thankfully for Emma Lee, Sheriff Jack Henry Ross believes there is more to Ruthie Sue’s death than meets the eye and sets out to investigate.  The Sheriff figures out that Emma Lee can see Ruthie (keeps catching her talking to thin air) and asks for her help with the investigation.

Sleepy Hollow, Kentucky is a small town full of quirky characters.  Zula Fae Raines Payne is Emma Lee’s grandmother and owns half of the Sleepy Hollow Inn.  Ruthie Sue owned the other half of the inn.  Zula married Earl Way Payne who used to be married to Ruthie Sue.  When Earl died he left his half of the inn to Zula.  Zula immediately moved into the inn right next to Ruthie Sue (just to annoy her).  Mayor Anna Grace May is always dressed up, smiling, and trying to earn more votes.  Anna Grace wants to bring in a hotel developer to the town (they want to buy the inn) which will help her with her campaign for governor.  Hettie is new to town.  She is temporarily working at the inn.  When she hears that a developer wants to buy it, she gets up a petition to stop the sale (which means, of course, that she loses her job).  Zula is suspected of killing Ruthie Sue but her alibi is she was at a doctor’s appointment.  Who has a doctor’s appointment at 3 a.m.?  Is there something going on between Doc Clyde and Zula?

I give A Ghostly Undertaking 4 out of 5 stars.  It is a humorous book with a good mystery and pleasing paranormal element.  The next book in the series, A Ghostly Grave will be out on March 31, 2015.

I received a complimentary copy of this book from Goodreads First Reads.

If you like paranormal cozy mysteries, Joyce and Jim Lavene have a cute new series.  It is the Retired Witches Mysteries.  Spell Booked is the first book in the series.  The second book is Looking for Mr. Good Witch and it will be out on October 6, 2015.

Thank you for checking out my review!  I am currently reading A Killer Collection by Ellery Adams.  I hope you have a wonderful weekend and Happy Reading!

Posted by Kris Anderson, The Avid Reader at 2:23 PM