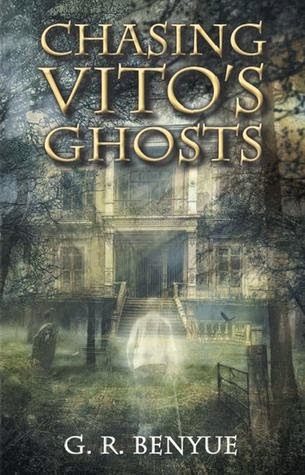 Chasing Vito’s Ghosts by E. R. Benyue is a different type of ghost story.  Becka Brandt has been seeing ghosts since she almost drowned when she was three years old.  She is an attorney who turned detective at her law firm in Boston until the death of her fiancé, Brad.  An explosion at her law office killed her fiancé and co-workers.  She has been having horrible nightmares since then and could no longer stay in Boston.  On the advice of her parents, Becka moves to East Ridge, Massachusetts.  Becka leases a house from V.J. Trovarrio (who also owns the local convenience store).  Becka discovers that V.J.’s father, Vito is still in the house (as a ghost).

Vito died a horrible death and he cannot rest until he finds out what happened to his great-grandchildren, Violet and Little Vito.  Vito was taking care of them when he was attacked and killed.  Becka is shocked to find a ghost in the house.  She made sure to visit the house before leasing it in order to avoid any ghosts.  Becka is reluctant to help Vito until she discovers two ghosts heading towards her house.  The two ghosts are the parents of Violet and Little Vito.  If they get to the house and discover the twins gone, there will be an explosion (and a lot of devastation).

Becka contacts her best friend, Faith (who is a federal prosecutor) for assistance.  Faith then contacts her ex-boyfriend, Drew Desmond who works with the FBI.  Drew enlists the help of a friend Ken Mitchell, who also works at the FBI.  Ken cannot see or hear ghosts but he can feel their presence (and weird smells).   Together they research Vito’s past to find out who could have killed him and taken the twins.  Becka is determined to get the twins back before their parents reach her house.

To find out who kidnapped the twins and Vito’s background, read Chasing Vito’s Ghosts.  I give Chasing Vito’s Ghosts 3.5 out of 5 stars.  I found the book to be very, very long and did not like the main character.  Becka has an amazing ability that instead of embracing she avoids whenever possible.  I know that Becka had been through a lot with losing her fiancé and co-workers but avoidance is never the answer (even in a book). I think the book needed further editing.  The idea is good, wonderful mystery, but it needs a little more work to make it great book.  It does get much better in the second half of the book.

I received a complimentary copy of this book NetGalley in exchange for an honest review.

Thank you for reading my review.  Have a wonderful weekend and Happy Reading!

Posted by Kris Anderson, The Avid Reader at 7:33 PM