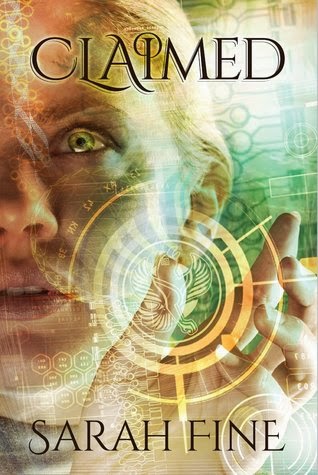 Claimed by Sarah Fine is the second book of Servants of Fate series.  Dr. Galena R. Margolis is traumatized after almost being killed the week before (also from a past brutal attack), but she is continuing with her research of a special vaccine (along with the help of her assistants Ankita and Jian).  Galena is already doing human trials with five subjects.  Galena’s vaccine is the only hope of stopping/conquering the plagues that are killing millions of people.  Someone, though, is determined to stop Galena from creating the vaccine.

Galena needs to be kept safe and alive, but how can that goal be achieved.  Declan Ferry has taken an interest in Galena.  He would like to get to know her, but time is not on their side.  Cacy Kerry (Declan’s sister) comes up with a plan but are Galena and Declan ready to pay the price?  Galena is going to have to overcome her violent attack in order to keep herself safe and create the vaccine that is badly needed.

Someone is taking control of the Ker’s and making them go against the wishes of the Lord of Kere’s, Jason Moros.  Who is behind these attacks?  Aislin Ferry is now the Charon (as well as the head of the family company Psychopomps) and has a lot on her plate.  She is trying to undo everything her wicked brother, Rylan did while in control as well as handle the attacks.  Someone is trying to change the fabric of fate and everyone is going to have to work together to keep it from unraveling.

To understand Claimed you need to read the first book in the series, Marked.  I give Claimed 4 out of 5 stars.  Please be aware that the book has a rape scene (Galena’s attack was mentioned in Marked and described in more detail in Claimed) and two sex scenes.  I give Claimed 4 out of 5 stars.  I liked the story but not as well as Marked.  This book read more like a romance novel and did not have the intensity of Marked.

Claimed is available on Kindle Unlimited if you are a member of the program.  Claimed will be out on March 24, 2017!  The next book will focus on Aislin and the Lord of the Kere's!  They should make an interesting couple!

Thank you for checking out my review!  Have a great evening and Happy Reading!

Posted by Kris Anderson, The Avid Reader at 7:28 PM