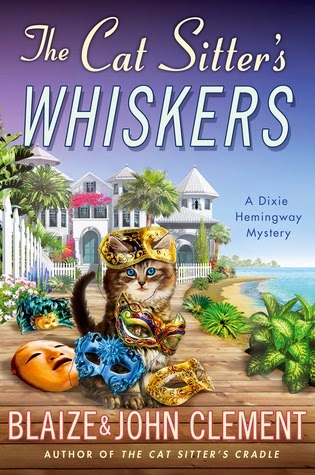 The Cat Sitter’s Whiskers by BlaizeClements and John Clements is the tenth book in the Dixie Hemingway Mysteries series.  Dixie Hemingway is a pet sitter living in Siesta Key, Florida (near Sarasota).  She will take care of all varieties of pets except snakes (and I do not blame her one bit)!  Dixie (no relations to the author Ernest Hemingway) used to be an officer with the Sarasota Sheriff’s Department until the death of her husband, Todd and daughter, Christy.

Dixie is up early to head over to the Keller’s house.  She rarely encounters other people at 5:00 a.m., but this morning she sees the car of paper carrier, Levi Radcliff.  She stops to see if Levi is having car trouble, and the car takes off.  Dixie continues on to the Keller’s who are on vacation to take care of Barney Feldman, their cat.  Dixie is almost finished when she is attacked by a strange statute.  When Dixie contacts the police upon waking up, they do not believe her story.  So Dixie figures it must have been a weird dream or hallucination and proceeds about her day (despite the giant bump on her head).

When Dixie discovers that many people did not get their paper that day, she decides to check on Levi.  Dixie and Levi went to school together, but she has not had much contact with him since high school.  When Dixie arrives at Levi’s home, he is dead in a pool of blood.  Who would want to kill Levi?  Dixie sets out to solve the murder along with handling some relationship issues with her boyfriend (do not use this word around Dixie), Ethan.

The Cat Sitter's Whiskers will be out March 31, 2015.  Another great book out on that day is Tails You Lose by Carol Perry.

I hope you are having a wonderful weekend.  I am currently reading Murder, Simply Brewed by Vannetta Chapman.  Take care and Happy Reading!

Posted by Kris Anderson, The Avid Reader at 6:06 PM