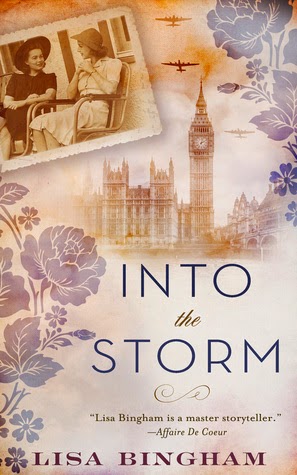 Into the Storm by Lisa Bingham is a historical romance set during the beginning of World War II.  RueAnn Boggs grew up Defiance, West Virginia.  Her father was a hard man and when RueAnn had a chance, she escaped.  RueAnn ended up in Washington, D.C. working as a seamstress for the performer Glory Bee Hallelujah.  Her father, though, is determined to find her.  Mr. Boggs has become a religious zealot and preacher.  RueAnn has received word from her sister, Astra that their father has discovered her location and is on his way.  As RueAnn is escaping the theater she runs into Charles “Charlie” Tolliver.  Charlie is British and a friend of Glory Bee.  He convinces RueAnn to accompany him to check out his aunt’s house (he inherited it from her).   Charlie has his own motives for asking RueAnn to go with him.

The two have a lovely day until gunshots ring out.  RueAnn’s father had found her and she was in a compromising position.  Charlie told Mr. Boggs that they were engaged to be married.  Mr. Boggs decides the wedding will take place immediately (with Mr. Boggs present with his shotgun).  Unfortunately, Charlie had to immediately catch a train to New York to make his boat back to England.

A year later (it is now 1940) RueAnn Boggs Tolliver makes her way to England.  She has not heard from Charlie recently and also wants to recover some letters.   RueAnn meets Charlie’s mother, Edna.  Edna is not pleased with RueAnn’s arrival.  She puts her in the maid’s room in the attic and informs RueAnn that Charlie has been missing for months.  Charlie was in France and was not able to get out ahead of the German’s invasion.  RueAnn will wait for Charlie to come home, but she will have to endure the Blitz, rationing, and finding a way to earn money in a foreign country.

Sara and Susan Blunt are twins who live next door to the Tolliver’s.  Sara is outgoing, gregarious, and is always going out with a different gentleman.  Susan is more subdued (and she likes books).  One night Sara asks Susan to help her out.  Sara “doubled booked” herself.  Sara wants Susan to take her place at the dance with Paul Overdone.  Susan is reluctant to agree, but she is drawn to Paul.  On this night England goes to war.  Paul asks to write and Susan agrees.  These letters are the one bright spot in Susan’s life over the next few months as she experiences significant loss.

RueAnn, Susan, and Sara become good friends during the war.  They help each other out during the extremely difficult times of war.  London endures extreme bombing from the German’s and they will all be lucky to survive.  Charlie’s love of RueAnn will help him endure and get back home to his wife.

Into the Storm is a lovely novel.  I give it 4.5 out of 5 stars.  Into the Storm is about the endurance, love, friendships, and survival.  Lisa Bingham did a wonderful job portraying what life would have been like during World War II in London.  To find out how they survived, what happens between Paul and Susan, if Charlie makes it home, and much more please read Into the Storm.

Into the Storm will be out on Tuesday, March 31, 2015.  I have tried to give you an overview of the book without giving away too much detail.  A lot happens in this book.

I hope everyone had a wonderful weekend (and got lots of reading done).  I am currently reading The Second Sister by Marie Bostwick.  Have a great evening and Happy Reading!

Posted by Kris Anderson, The Avid Reader at 6:35 PM