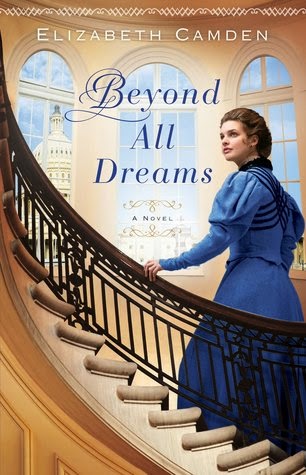 Beyond All Dreams by Elizabeth Camden is a sweet Christian romance novel.  It is 1897 and Anna O’Brien is a map librarian with the Library of Congress.  Anna has worked in the Library of Congress for six years.  There are only eight women working in the Library of Congress (out of the 40 employees).  Anna got her love of maps from her father who was a cartographer with the Navy.  Anna’s father died when she was twelve years old.  Anna was told that the Culpeper (the Navy ship her father was working on) and her crew went down during a hurricane.  Anna has found a discrepancy in the official report and she is determined to get the error corrected.  Anna wants to know what really happened to the Culpeper and her father.

Anna has not had an easy life.  Her mother died in childbirth and after the death of her bather, she was raised by her Aunt Ruth and Uncle Henry.  Unfortunately for Anna, Uncle Henry liked to drink.  One night he could not find the soap to wash out Anna’s mouth (evidently she had a foul mouth when she was younger) and used lye instead.  It burned her throat.  She could not talk until surgery helped restore her voice.  The one person who has always been there for her is her best friend, Neville Bernhard who works in the U.S. Patent Office.  Anna loves new technology.

Lucas Callahan is a young Congressman from Bangor, Maine.  One day he is in a meeting of the Committee of Fisheries when he notices Anna O’Brien.  Luke is instantly taken with her and sets out to get to know her better.  Luke ran for Congress to get away from his family.  The Callahan family has trouble with alcohol.  Luke is also the guardian for his nephew, Philip.  Luke’s sister, Julia gave birth to Philip out of wedlock.  Because of her trouble with alcohol and depression, Luke felt it was better for Philip to be in Washington.  Luke grew up with a father who had a horrible temper and it was worse when he was drunk.  His younger brother, Jason also is too fond of drink.  Luke wants a better life.  He would like to have a wife and family.

I give Beyond All Dreams 4.25 out of 5 stars.  It is a delight to read.  There is romance, humor, mystery, and a happy ending.  I also enjoyed the setting—Library of Congress!  Beyond All Dreams is an appealing and engaging story.  I look forward to reading more books by Elizabeth Camden.

I won a copy of this book through Goodreads First Reads program.

I just saw a cute new cozy listed on Amazon.com.  The name of the book is Rest Ye Murdered Gentlemen by Vicki Delaney.  It is the first book in a new series and will be out November 3, 2015 (it seems so long away, but it will be here before you know it).  It is a Christmas themed book!  If you like cozy mysteries, check it out.

Thank you for reading my review!  Have a great weekend and Happy Reading!

Posted by Kris Anderson, The Avid Reader at 6:58 PM