Secrets of the Tower 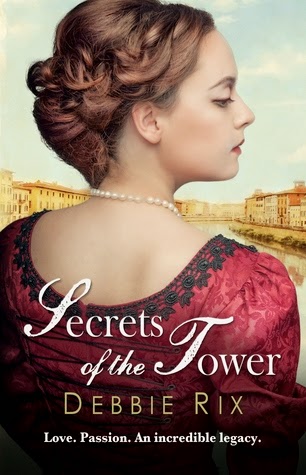 Secrets of the Tower by Debbie Rix is set partly in 1999 in Kent, England and Pisa, Italy and then it goes back to 1171.  Sam is married to Michael and they have three children.  Sam used to be a report on radio and then on television.  Michael is a documentarian.  Michael is in Pisa doing a film on the restoration of the Leaning Tower of Pisa as well as its background.  Then Michael suffers a stroke.  Sam flies to Pisa to be with him, but it is difficult since she just found out that Michael cheated on her (with a younger woman).  While Michael is recuperating Sam continues the research into the Leaning Tower of Pisa.  Sam is trying to find out who funded the project and who designed the tower.

Seventeen year old Berta di Bernardo married Calvo Lorenzo who was thirty-six.  Berta became known as a patron of the arts using her husband’s money.  After seventeen years of marriage Berta fell for Gerard di Gerado.  Gerard worked with his grandfather on the early buildings in Pisa.  Berta wanted Gerard and was determined to help further his career.  Berta’s maid, Aurelia also fell for Gerard and Gerard loves Aurelia in return.  However, people knew better than to cross Berta.  Berta could either make or break young Gerard’s career.

The story chronicles what Berta did to help with the design and construction of the Leaning Tower of Pisa.  A beautiful and unique campanile in Pisa.  The story also describes about why the tower leans and how the tower was stabilized.

Secrets of the Tower is a very slow starter.  I thought this book would be wonderful and interesting. I am a history buff and had not read any books on the Tower of Pisa.  Once I got about 60% through the book, I was able to get into the story.    I like the author’s suggestions about a female’s influence on the design of the tower.  I give Secrets of the Tower 3.75 out of 5.  I liked it, but I would never have purchased this book.  I have tried to give you a brief overview of the book without giving away a lot of the details of the book.

Thank you for reading my review.  I hope you have had a wonderful Thursday!  Happy Reading!

Kris
Posted by Kris Anderson, The Avid Reader at 9:14 PM