A Toast to Murder: A Mack's Bar Mystery 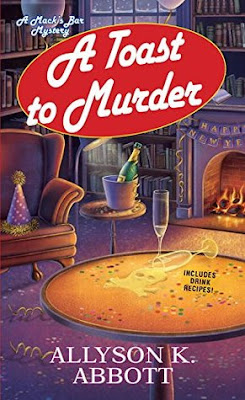 A Toast to Murder by Allyson K. Abbott is the fifth novel in A Mack’s Bar Mystery series.  Mackenzie “Mack” Dalton owns Mack’s Bar in Milwaukee, Wisconsin.  Mack has been able to use her synesthesia to help solve crimes.  But one person does not believe in her ability.  Mack keeps receiving letters that test her abilities and each missive has a deadline.  If Mack does not interpret the clues in time, a person close to her will die.  One person has already lost their life (Mack was in an accident and broke her leg).  Mack, with the help of her friends, sets up a trap to catch the killer.  She has an idea as to the identity of one of the perpetrator’s, but she believes the individual is not working alone.  A New Year’s Party at the bar is the perfect venue to expose the evil doers.  But things do not work out quite as planned.  Mack will need to use her special gift to reveal the villain before he (or she) is disappears into the night.  Will Mack’s New Year’s resolution come true?

A Toast to Murder contains good writing and has a nice flow making for an easy to read (and enjoy) cozy mystery.  I like Mack Dalton and her uncommon ability (I consider it a gift not a disorder).  It something I was unfamiliar with prior to this series, and it is unique in cozy mysteries.  A Mack’s Bar Mystery series needs to be read in order.   Otherwise, you will be missing pertinent details regarding the mysterious letter writer and havoc it has caused to Mack’s life.  There is some repetition of details (Mack’s disorder and the case).   I am rating A Toast to Murder 4 out of 5 stars (I liked it).  The mystery is complex and it has evolved over the five books in the series.  I did feel that the suspect list was a little long (over a dozen).  I believe most readers (except armchair sleuths) will be surprised when the guilty party is revealed.  Avid mystery readers, though, should be able to pinpoint the wrongdoer.  The clues pointing to the person’s identity are subtle.  My major issue with A Toast to Murder is the prominent romance.  There is a love triangle (big sigh) that has unfolded slowly over the last four books.  I am happy that Mack decides between her two beaux at the end of the book, but I was disappointed Mack’s choice.  I did favor one fellow over the other (I would say which one, but then I would spoil it for you).  I look forward to reading the next book in A Mack’s Bar Mystery series.

I hope you found my review helpful.  I am currently reading All Signs Point to Murder by Connie di Marco.  I will be sharing my thoughts about The Address by Fiona Davis on Thursday.  I hope you have a blessed Wednesday.  Take care and Happy Reading!