The Promise of a Letter: An Amish Letters Novel 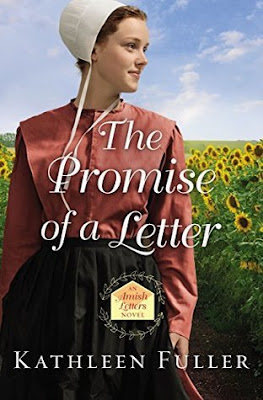 Thank you for visiting today.  My cold is still present, but I can get up and do small things around the house.  I am just thankful the debilitating migraines have eased up.  I wanted to mentioned that Ax to Grind by Tonya Kappes is out in paperback.  The kindle version will be published on September 19. It is the third book in A Kenni Lowry Mystery series.

The Promise of a Letter by Kathleen Fuller is the second An Amish Letters Novel.  It is August in Birch Creek, Ohio.  Roman Raber left his Amish community of Draperville, but things have not gone as planned.  He wishes to go to college to become an engineer, but he cannot get the funding he needs.  Roman receives a missive telling him his beloved grandmother has passed away.  She left him a letter suggesting that he reconcile with his brother, Daniel.  Roman knows it will not be easy, but he does know it is the right decision.  Roman knows that Daniel will not make the task easy, but Roman is hoping Daniel will forgive him in time.

Leanna Chupp is an unusual Amish woman.  She is twenty-four, 6-foot-tall, unmarried and works at Daniel Raber’s small engine repair shop.  Leanna enjoys her work (has a knack for it) and is happy with her independence.  Shortly after Roman returns to the community and starts working at Raber’s Small Engine Repair, Leanna finds herself out of a job without a warning or a reason.  An accident brings Roman and Leanna together to work towards a mutual goal.  They slowly get to know each other, and Leann begins to envision a different future for herself.  But is Roman ready to commit to the Amish community?  Will Daniel be able to forgive his brother?

The Promise of a Letter is a well-written, has a steady pace and beautiful setting.  I liked the characters especially Leanna Chupp.  I found her to be a refreshing change.  I appreciated that she had an unusual occupation and that she was not afraid to be herself.  It was nice that the pair become friends and get to know each other before the romance develops.  The story had good life lessons (giving and accepting forgiveness, power of prayer, holding on to your faith, gossip).  My favorite was the harmful effects of rumors/gossip.  The Christian element is noticeable, but it was light (handled very well).  My rating for The Promise of a Letter is 4 out of 5 stars (I liked it).  I did feel that the ending was rushed.   The Promise of a Letter is a sweet, heartwarming story with good messages.  I am looking forward to reading the next book in An Amish Letters Novel series that will contain Ivy’s story (Words from the Heart in February 2018).  Written in Love is the first book in the series.  Each book in An Amish Letter Novel series can be read independently.

I appreciate you reading my review.  I am currently reading A Tale of Two Kitties by Sofie Kelly (cute story).  On Friday I will be sharing my thoughts on When the Bishop Needs an Alibi by Vannetta Chapman.  May each of you have a smashing Thursday.  Take care and Happy Reading!