Gathering the Threads: The Amish of Summer Grove 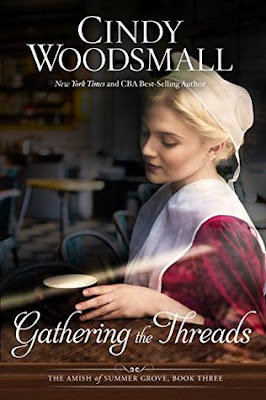 Happy Book Release Day!  Some of the new releases are A Mother for Leah by Rachel L. Miller, The Bequest by Nancy Boyarsky, Gathering the Threads by Cindy Woodsmall, The Promise of a Letter by Kathleen Fuller, and Tiny House on the Hill by Celia Bonaduce.  I hope you find some new novels to add to your TBR pile!

Gathering the Threads by Cindy Woodsmall is the final novel in The Amish of Summer Grove series.  Ariana Brenneman is returning to the Old Order Amish community where she was raised before it was discovered she was switched with Englischer, Skylar Nash.  Settling back into her old life, though, is not easy.  Arianna is no longer sure what she believes in and needs time to think things through.  Arianna is less accepting of authority (being told what to do).    Isaac, Arianna’s father, does not understand the changes in Arianna and is worried her attitude will affect other members of the family (the Amish leaders are not pleased).  Rudy, Arianna’s beau, has been waiting for her to return so they can marry, but he does not understand the dilemma facing Arianna.  Quill Schlabach is the one-person Arianna can discuss what she is feeling and thinking, but the Amish leaders (and Arianna’s father) to do not approve of Quill.  Everyone has an opinion about Ariana, her behavior and her future.  But what does Ariana want?  What is God’s will?  Skylar Nash has adjusted to life in the Amish community and with the Brenneman’s.  She has found her niche, but she worries what will happen now that Ariana has returned.  Each woman must discover where they truly belong.  The path to their future will fraught with potholes, but, at the end, they will find what their hearts truly desire.

Gathering the Threads is well-written and engaging.  It contains nicely developed characters that grow and change over the course of the series (Nicholas is a great example).  I do feel the pace was a little slow.  Gathering the Threads is the third book The Amish of Summer Grove series, and the books are best read in order.  There is a great summary at the beginning of Gathering the Threads that reminds readers on what occurred in the Ties that Bind and Fraying at the Edge (it has been a year since the last book).  My rating for Gathering the Threads is 4 out of 5 stars.  I did feel the story dragged on a little long with some parts of the book feeling like filler (they were unneeded and did not enhance or add to the story).  I would not survive one day living Amish.  It is a patriarchal society that goes against my beliefs.  I felt bad for Ariana (while cheering for her) when the Amish leaders attacked her for not bowing to their authority and rules (I loved it when she took back her cellphone).  It was difficult for her to be standing with one foot in each world (one in Amish and one with her biological parents).  The Christian element is prevalent throughout the story, but it is handled beautifully by the author.  I like the themes of acceptance, forgiveness, faith, and love.  I do feel the end was a little rushed.   Ariana reaches a decision about her future (one her own) and then the story concludes.  The ending is heartwarming and nicely wraps up the three-book series (no dangling threads).  We get a little glimpse at what the future holds for Arianna, Skylar and their families.  I was especially pleased to see closure for Frieda Miller (about time).   I look forward to reading Cindy Woodsmall's next book!

Thank you for visiting and reading my thoughts on this Amish novel.  I will be featuring The Bequest by Nancy Boyarsky on Wednesday.  I really hope that each of you have very special days.  Take care and Happy Reading!