The Return: An Amish Beginnings Novel 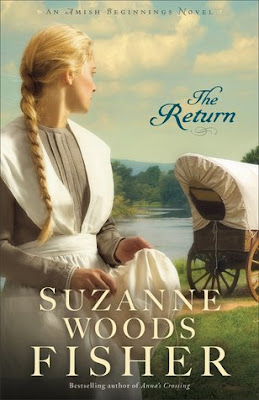 Thank you for visiting today.  I hope you are having a good start to your weekend.  Suzanne Woods Fisher is the author of An Amish Beginnings series (and other Amish novels).  You can follow Ms. Fisher on Facebook and Amazon. Readers can get more information about the author and her books on her website. There is a giveaway on her site until August 15 (great prize).

The Return by Suzanne Woods Fisher is the third book in An Amish Beginnings series.   Readers are taken to Stoney Ridge in April 1763.  Betsy Zook is in love with Hans Bauer and looks forward to his proposal of marriage.  Then one night her life is changed when the Indians attack, kill her parents and take her hostage along with her brother, Johnny.  Willie Zook hid in a hollow log and after the Indians depart, he runs to the nearest town.  Hans wants to immediately set out to find Betsy, and it takes some work to convince him that would not be the best idea (due to the number of Indians and they have no idea where the hostages were taken).  Betsy and the other hostages are taken into the mountains where they are given to various Indian tribes (in tribute).  Hans rails against the Indians much to his families’ consternation.   Tessa Bauer has cared for Hans for some time and is happy when he starts to pay attention to her.  Hans is ready to move on with his life, but then Betsy is returned to them.  Caleb, half Indian and half Mennonite, engineers Betsy’s escape and returns her to the Bauer family.  Hans is thrilled to have Betsy back, but his quest for vengeance has not been extinguished.  Betsy, Caleb, Hans, and Tessa have choices in front of them.  Will they make the right decisions?  What does the future hold for them?  Join them on their journey in The Return.

The Return is well-researched and contains good writing.  I thought the characters were well-developed (thought out).  The Return is an emotional novel (great sadness and loss).  I have to say that The Return is my least favorite novel in An Amish Beginnings series.  There is extreme violence and cruelty in the story that was disturbing to me.  I am fully aware it is based on true events, but I do not like to read about the violence in such detail (one scene near the end was extremely off putting).  I did find the information about Conestoga wagons (the creation, design) to be fascinating.  My rating for The Return is 4 out of 5 stars.  I highly recommend reading Anna’s Crossing and The Newcomer prior to The Return.  Otherwise, it can be confusing with the various characters, their relationships, and how they came to America.  Some of the themes or life lessons in the story are prejudice, revenge, racism, tolerance, jealousy, faith, love, and trusting God.  I liked the phrases “triumph of human spirit” and “sovereignty of God in all things”.   I was disappointed with the ending.  It was unsatisfying and odd.  It felt incomplete.  The Christian element was handled beautifully.

I have a few errands to run (I have put them off as long as I can) and then I will be reading Assaulted Caramel by Amanda Flower.  May each of you have a relaxing day.  I will be reviewing Tiny House on the Hill by Celia Bonaduce next time.  Take care and Happy Reading!