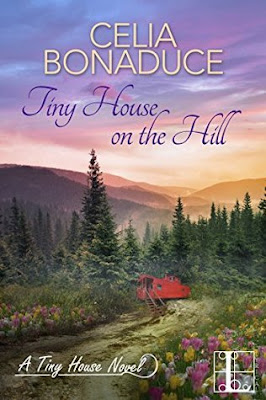 Happy Sunday!  I wanted to share some new novels that will be publishing on August 15.  They are The Promise of a Letter by Kathleen Fuller, Tiny House on the Hill by Celia Bonaduce, A Mother for Leah by Rachel L. Miller, The Bequest by Nancy Boyarsky, and Gathering the Threads by Cindy Woodsmall.


Tiny House on the Hill by Celia Bonaduce is A Tiny House Novel.  Clarisse “Summer” Murray is twenty-eight years old and has decided to make some big changes.  Summer has quit her job, sold her condo, and commissioned a tiny house in the shape of a caboose.  After shrinking a cashmere sweater in the wash and discovering she cannot unshrink it, Summer explores felting.  She is going to felt sweaters, make them into purses, and sell them at craft shows while traveling around the continental United States (let’s forget that she does not know how to sew).  Then she receives a call from her grandmother, Queenie asking her to come home to Cat’s Paw, Washington to help with the family bakery, Dough Z Dough.  Summer packs up Big Red (her new truck), leaves most of her belonging behind (her neighbor, Lynnie will dispose of them for her) and heads to Kentucky to pick up her new tiny home.  Bale Barrett, of Bale’s Tiny Dreams, has her new home ready to go.  After having dinner with Bale and making plans to meet in Seattle in a few weeks, Summer starts her new life as a tiny home owner with her dog, Shortie.  Summer has not been home in ten years since her heart was broken by bakery manager, Keefe Devlin.  She is hoping to fix whatever is wrong with the bakery, and quickly head off on her adventure.  But her grandmother’s odd behavior puts a wrinkle in her plans (just the first of several).  Summer must discover what is bothering Queenie and (finally) deal with her unresolved feelings toward Keefe.

Tiny House on the Hill is a light-hearted romance novel (which was not what I expected).  The story is easy to read and has a steady pace.  I liked Shortie (he was a cutie).   I just felt the story was a little cheesy (silly too).  Summer put more research into how Shortie should travel in the truck, then her journey (tiny homes are not accepted everywhere plus she should have done test drive’s before embarking out on the open road).  Summer fantasizes romance with her tiny home builder (she met him once) and then gets jealous of Keefe being around his old girlfriend, Evie (really, after ten years).  Summer ogles, flirts and thinks too much about Bale and Keefe (reminded me of a sixteen-year-old girls reminisces).  My rating for Tiny House on the Hill is 3 out of 5 stars.  The story had the expected ending (which was a little rushed).  I did appreciate the attention brought to suffers of celiac disease (my own sister has this issue).  Summer’s tiny house sounded adorable.  I have (like many people) watched the shows on these portable, tiny homes (my books would not fit into 220 square feet).  Lynnie provided some comic relief.   If you are wanting a light, humorous romantic story to read, then check out Tiny House on the Hill.  Tiny House on the Hill will be published on August 15.

I appreciate you visiting today.  I am currently reading The Girls of Mulberry Lane by Rosie Clarke which I will be reviewing on August 27 as part of a blog tour.  I sincerely hope that each of you have a satisfying Sunday.  I will be sharing my thoughts on A Mother for Leah by Rachel L. Miller on Monday. I hope you return to see what I think about this Amish novel.  Take care and Happy Reading!