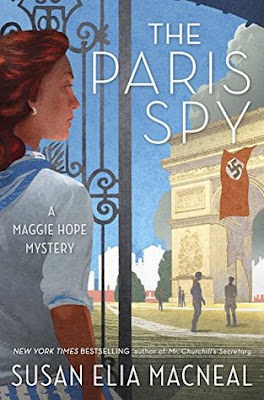 Welcome.  I hope everyone had a nice, relaxing weekend.  Grave Errors by Carol J. Perry is the fifth A Witch City Mystery novel and will be available on August 29.  There are several new cozy mysteries coming out on that date.  My favorite new cozy coming out next week is Assaulted Caramel by Amanda Flower.

The Paris Spy by Susan Elia MacNeal is the seventh novel in A Maggie Hope Mystery series.  Maggie Hope is in agent with SOE—Special Operations Executive.  She is in occupied Paris waiting for the documents she needs to start her assignment.  Maggie wants to find her missing half-sister, Elise Hess and fellow spy, Erica Calvert.  Erica had been sent to get soil samples England needs to plan its invasion.  They know that Erica was captured, but they do not know where she hid the samples she obtained.  Maggie is curious how the enemy discovered that Erica was an agent—could there be a mole in their department.  Maggie assumes the identity of Paige Kelly and checks into The Ritz.  She did not count, though, on meeting inquisitive Coco Chanel.  Maggie will need to work carefully and strategically to get the intel she needs, find her sister, discover what happened to Erica, retrieve the missing samples and get herself out of France.  Join Maggie on her latest mission in The Paris Spy!


The Paris Spy is well-researched and contains good writing.  I liked the addition of Coco Chanel.  I did find the pace to be slow (good for my insomnia, but not for reading).  There is a significant amount of historical detail which makes an accurate book, but, in fiction, can make a boring book.  At times, it felt like I was reading a nonfiction novel instead of fiction.  Maggie is portrayed as a strong female character (most of the time), which I really appreciate.  There are not enough strong, female role models in cozy mysteries.  My rating for The Paris Spy is 3 out of 5 stars.  The guilty party (the mole) was easily identifiable.  I was hoping it would be more of a challenge.  Maggie not being an experienced spy showed in this story.  She always seemed to be on edge and scared (I can understand the feeling, but she is a spy—albeit an inexperienced one—and should be careful in public).  I was surprised that she was not captured by the Germans the first day.  I had a difficult time wading through The Paris Spy and the ending was dissatisfying.  History is one of my favorite subjects (especially WWII), but The Paris Spy missed the mark for me.  I felt the author missed a great opportunity with this novel.  I have decided not to continue with this series.

Thank you for your visit.  I am currently reading Macrame Murder by Mollie Cox Bryan.  I wish for each of you to have a very pleasing and safe Monday.  We are experiencing troubling times in America.  I will be reviewing Silvia's Rose by Jerry S. Eicher on Tuesday.  Take care and Happy Reading!