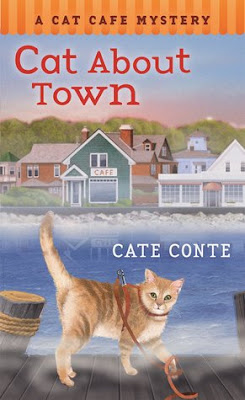 Welcome!  Thank you for visiting today.  I wanted to share some of the new books coming out this week.  All Signs Point to Murder by Connie di Marco, The Paris Spy by Susan Elia MacNeal, The Amber Shadows by Lucy Ribchester, Any Dream Will Do by Debbie Macomber (08/08)  and A Pinch of Salt by Eileen Ramsey (08/10).

Cat about Town by Cate Conte is the first novel in A Cat Café Mystery series.  Madalyn “Maddie” James has returned home to Daybreak Island for her grandmother’s funeral.  At the cemetery, Maddie spots an orange cat peeking around a gravestone.  Later at Grandpa Leo’s beautiful old Victorian home, he tells Maddie that Frank O’Malley is trying to force him to sell the house.  Frank has big plans for the island which include a transportation rental center on Leo’s property (tearing down their family home).  Maddie arranges to meet Frank at a local restaurant and heated words are exchanged.  After walking around town, she ends up at her grandmother’s grave where she meets up with the orange cat again. The cat follows Maddie to the Food Stroll where she meets up with her friend, Becky Walsh.  Suddenly, the cat takes off with Maddie quickly following behind him.  She finds her furry friend under a table staring at a deceased Frank O’Malley.  The police put Maddie and her grandfather, Leo at the top of the suspect list.  Maddie and her new feline companion, J.J. (who is being hailed a hero) set out to discover Frank’s killer. Will the killer strike again before Maddie uncovers his identity?

Cat about Town started off at a good pace and I was intrigued by the story.  The further I progressed into the book, the more mundane it became.  It seemed like the author had followed a formula or outline for a cozy mystery.  We have our female protagonist, two male suitors, a cute cat, nasty guy who gets himself murdered, our suspects, rude investigator, protagonist investigates to clear her name or that of loved one, life threatened, and bad guy apprehended.  I liked the addition of the mysterious benefactor and the idea of a cat café (for details about a cat cafe click here).   I not heard of cat cafes prior to this novel.  I am giving Cat About Town 3 out of 5 stars.  The murder of Frank O’Malley was easily solved.  There is some misdirection, but the killer’s identity was not a shocker.   There is a little twist that will surprise most readers (I would say more but it is a spoiler).  I do wish the author had not given Maddie two beaus.  The last thing I want (or readers need) is another love triangle in a cozy mystery.  I like how close Maddie is with her grandfather, Leo.  They have a sweet relationship.  I wish there had been less repetition of case details and more solid content (less fluff and romance).  I will read the next book in A Cat Café Mystery series.  I am curious to find out more about the mysterious benefactor and see the development of the cat café.  FYI--Cate Conte is a pseudonym for Liz Magavero who writes A Pawsitively Organic Mystery series (humorous cozy mysteries).

May each of you have a nice, relaxing Sunday.  I am reading Amber Shadows by Lucy Ribchester (I am having trouble getting into it).  I am will be sharing my review of To Wager Her Heart by Tamera Alexander on Monday.  Take care, stay cool in this heat and Happy Reading! 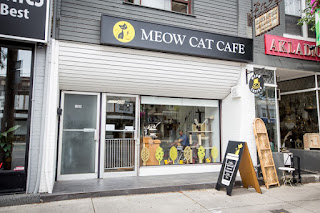 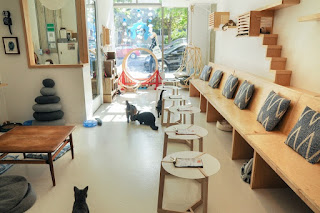