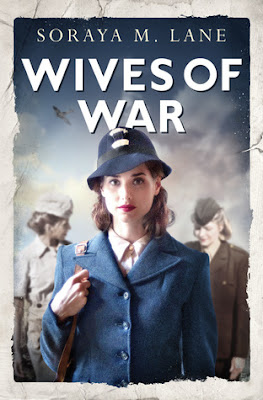 Greetings!   Assaulted Caramel by Amanda Flower will be out on August 29.  It is the first book in An Amish Candy Shop Mystery series.  It is a cute cozy mystery with great characters, entertaining mystery and wonderful chocolate descriptions.  I look forward to reading Lethal Licorice (second book in series) when it comes out.


Wives of War by Soraya M. Lane is part of a three-book collection that takes readers back to the World War II era.  It is 1944 and Scarlet Alexander has joined Queen Alexandra’s Imperial Nursing Service (QA nurses).  Scarlet is waiting for the train (and a little nervous) and is happy when Ellie O’Sullivan introduces herself. The pair are reporting for duty and final field training.  Scarlet comes from a privileged background and is joining against her families wishes.  She has not heard from her fiancé, Thomas is thirteen weeks and is worried about him.  Scarlet feels nursing will allow her to look for Thomas.  She knows he is still alive.  Ellie has three brothers off fighting and she wishes to do her bit for the war effort.  Ellie meets Dr. Spencer Black while training for the front and they are attracted to each other.  Scarlet meets a soldier named James who makes her forget about her missing fiancé.  Ellie and Scarlet are soon sent to France where are they inundated with injured soldiers.  The unflappable Lucy Anderson is assigned to their unit as a surgical nurse.  Lucy wants to enroll in medical school after the war.  Rough conditions, little food and long hours are in store for these nurses.  Their friendship will help them endure these difficult conditions along with hope and love.

I thought Wives of War was easy to read and had a good pace (in most sections).  However, Wives of War is a book for readers who enjoy romance novels.  Love is in the air for Lucy, Scarlet and Ellie and the war takes a backseat for the majority of the novel.  The war in France plays out in the background while these ladies flirt (for the most part).  I found the dialogue to be very American.  It did not match up with the characters.  Scarlet is upper-class British and should speak differently from Irish Ellie.  There are a couple of British phrases tossed in here and there but they do not make the novel any more British.  I also felt it was lacking in historical accuracy.  I am rating Wives of War 3 out of 5 stars (it is okay).  I found Wives of War to be expected (predictable) and a repetition of basic details (how many times were we told Scarlet loved Thomas).  I thought the characters were lacking and flat.  They were not fleshed out and developed.  Friendship blossoms instantly between the ladies (they just met), and then they fall in love just as quickly (Instant connection).  I thought it was unrealistic (even for fiction).  I wanted a story with more depth (about nurses working in Europe, their patients, etc.) with less focus on women finding husbands in the middle of a battle field.  I wish the publisher had written the blurb differently (it is listed as historical fiction).  If I had known it was a romance novel, I would have passed.  My mother also read this novel and came away with the same impressions (which is rare for the two of us).  Voyage of the Heart and Hearts of Resistance (January 17, 2018) are the other novels in the collection by this author.  Wives of War is available through the Kindle Unlimited program.

Thank you for visiting.  I will be reviewing Trouble in Dixie by Rebecca Barrett next time.  May you have a spellbinding day!  Take care and Happy Reading!