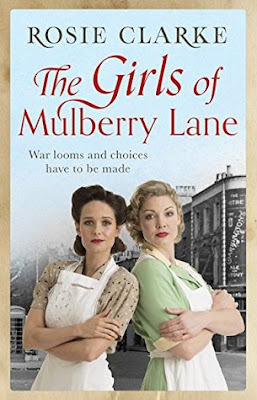 Happy Sunday!  I am still sick, but I can sit upright for short amount of time. My daughter was kind enough to bring me won ton soup (I prefer Chinese food when I am sick).  My mother and daughter commented that they have not seen me this sick in a very long time (and that's saying something for a person with Fibromyalgia).  Today I am featuring the latest historical novel by Rosie Clarke. Ms. Clarke has written The Workshop Girls series, Jessie's Promise, The Downstairs Maid, Emma Trilogy, and so many more wonderful historical books.  I (as well as my mother) enjoy her stories.


The Girls of Mulberry Lane by Rosie Clarke is the first book in The Mulberry Lane series (1938).  We are swept back to London’s East End on Mulberry Lane in 1938.  War will be breaking out across Europe and England will soon be getting into the fight.  Peggy Ashley and her husband, Laurence own the Pig and Whistle pub in London’s East End.  Peggy is the mother figure to the people of Mulberry Lane.  Maureen Jackson is Peggy’s closet friend.  Maureen wanted to marry Rory Mackness after her mother passed away, but her father used emotional blackmail (playing sick) to keep her at his side.  Maureen takes care of her father and runs their little discount store on Mulberry Lane.  She still loves Rory, but he moved on when she would not leave her father.  Rory is now married and full of regrets.  Janet Ashley is eighteen years old and is in love with Mike Rowan.  Mike is ready to enlist in the Navy, but he wants to marry Janet before he departs.  Laurence refuses to give his blessing and sign the necessary papers (Janet is underage).  Mike knows there is one way to ensure they are able to wed.  Two young people in love cannot be denied their passions.  Janet ends up pregnant and quickly wed with Peggy’s blessing.  The Ashley family is divided and Peggy wants to find a way to bring them back together.  Is there a chance of happiness for Maureen?  Will Peggy be able to heal the rift in the Ashley family?

The Girls of Mulberry Lane is a well-crafted novel.  It contains good writing and the book is realistic of the time period.  You can tell the author did her research for this novel.  The book has a slower pace, but it suits the story.  The characters were brought to life.  As a reader, I could feel their struggles, heartaches, love, joy and regrets.  The book contains British slang that was common during that time period.  It added realism and flavor to the story (did not feel like an add in).  My rating for The Girls of Mulberry Lane 4.5 out of 5 stars.  I was drawn into the story and my attention (for the most part) was held.  There were a couple of slow areas, but they were few.  I like this gritty yet hopeful novel.  It contains real life struggles that people encountered during this era (as they prepare for another war).  We get to see the characters overcoming adversity.  The book has hope, love, friendship, secrets, sacrifice, and the ties of family.  The Girls of Mulberry Lane is a lovely, wholesome story that I enjoyed reading. I am looking forward to reading A Wedding at Mulberry Lane when it comes out (January 2018).  The Girls of Mulberry Lane is on the Kindle Unlimited program and is currently $1.99 on Amazon.

Thank you for visiting today and reading my review.  I hope all of you have a lovely, relaxing day.  I am currently reading When the Bishop Needs an Alibi by Vannetta Chapman (I can read for short amounts of time).  I will be reviewing Shot in Darkness by Heather Sunseri on Monday.  Take care and Happy Reading!