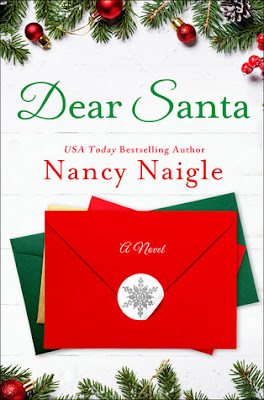 Dear Santa by Nancy Naigle has us traveling to Pleasant Sands, North Carolina.  Angela Carson owns Heart of Christmas located in an old lighthouse in Pleasant Sands, North Carolina.  She is the third generation to run the store, but Angela is unsure how much longer the store can survive.  Business has not been as brisk this year and it has gotten worse since Christmas Galore opened.  While Heart of Christmas sells one of a kind handcrafted items, Christmas Galore carries more affordable options.  Angela’s niece suggests she write to Santa via the Dear Santa app (sponsored by Christmas Galore) for help.  Angela takes the opportunity to vent and waits to see what type of response she receives.  Geoff Paisley manages Christmas Galore with his mother, and they move every two years to open a new location.  Dear Santa is Rebecca Paisley’s special project and answers certain letters personally.  When Rebecca becomes ill, she asks Geoff to answer the letters for her.  A letter from Anita C. Miracle intrigues Geoff and he soon begins writing to her on a regular basis.  When Geoff learns that Anita C. Miracle is Angela he is surprised, since they clash whenever they run into each other.   Is there a chance for these two to reconcile their differences?  See if the magic of Christmas can work on Angela and Geoff in Dear Santa.

Dear Santa is the perfect book for those who love to watch the Hallmark Christmas movies.  It is nicely written with a cute romance and the story progresses along at a steady pace.  I enjoyed the Dear Santa letters are the beginning of the chapters along with the trivia for Pleasant Sands, North Carolina.  I liked the Angela’s store, Heart of Christmas.  The store is in a lighthouse that features handcrafted items in a cozy atmosphere which I think is a wonderful idea.  It is a shame that Angela did not keep up with the times.  She was still running the store the same way it had been since the beginning (no online presence).  Pleasant Sands sounded like a charming coastal town with friendly residents.  I admit that I was not a fan of the main characters (Geoff and Angela) and especially disliked Angela’s sister, Marie (not supportive of her sister’s store).  My favorite character was Angela’s niece.  I did appreciate that Angela grew from her experience and I liked the epilogue.  I did find that Dear Santa was very similar to the popular movie You’ve Got Mail.  There is a secondary storyline regarding Rebecca Paisley and how she met Geoff’s father along with Virgil, their operations director.  Unfortunately, the storyline seems to peter out and readers are left with unanswered questions.  I was curious how Geoff did not realize he was writing to Angela write away.  It was extremely obvious (Angela’s niece would have figured this one out sooner).  I kept hoping for a different solution for Angela’s store and was disappointed how this thread played out.  I wanted to give Angela a good talking too and suggest ways to improve her business.  I am giving Dear Santa 3 out of 5 stars.  Dear Santa is a book for readers who love feel-good romance novels.

Thank you for stopping by today.  I will see you tomorrow when I return to feature Alaskan Holiday by Debbie Macomber.  I sincerely hope you have a day filled with happiness.  Take care and Happy Reading! 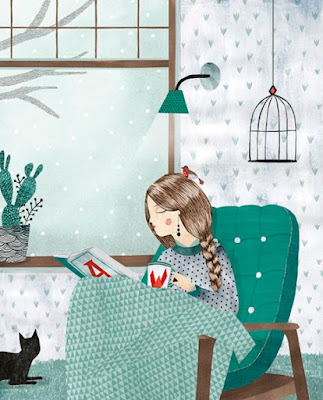