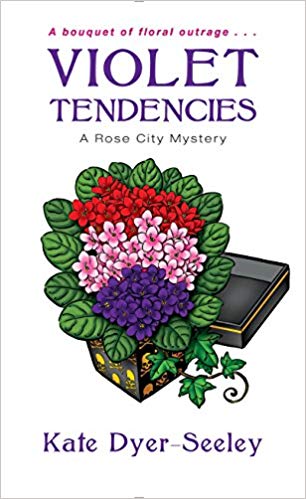 Who could object to a flower festival?

Britta Johnston and her aunt Elin are delighted that their Portland floral boutique is part of the city’s Rose Festival, which draws thousands to the Pacific Northwest for dragon boat races, fireworks, and other attractions—capped off by a big parade. They’re building a float that’s sure to rock the judge’s boat . . . until a gang of angry protestors shows up. The group, who call themselves Dark Fusion, are decidedly not into flower power, and they want to take down the system . . . including the upcoming extravaganza.

Then their leader is strangled with a garland of violets—and Britta finds the body. With tensions running high and so much at stake, there are plenty of suspects, from the Grand Marshal to a longtime volunteer to a former Rose Queen. But before Britta and Elin can stem the violence, the case is going to get even more explosive . . .

Kate Dyer-Seeley aka Ellie Alexander writes multiple mystery series, all with a Pacific Northwest touch. She lives in the PNW with her husband and son, where you can find her hitting the trail, at an artisan coffee shop, or at her favorite pub. Better yet—at all three.  Readers can connect with the author on Facebook, Twitter, Instagram, and GoodReads.


Violet Tendencies by Kate Dyer-Seeley sweeps readers to Portland, Oregon.  Britta Johnston and her Aunt Elin own Blooma, a boutique European-inspired flower shop and wine bar.  The pair were delighted when Blooma was chosen as the showcase florist for Portland’s Rose Festival and they will be creating the centerpieces for the dignitaries’ dinner.  They will also have a float in the parade featuring violets, but their joy is marred by protestors from a group called Dark Fusion outside the warehouse housing the floats.  Britta arrives early one morning to work on the float and finds Dark Fusion’s leader, Sham dead on Blooma’s ravaged float with a noose of violets around his throat.  Britta wants to know who killed Sham and why they used Blooma’s float.  There are numerous suspects including Ted Graham, the Rose Festival’s Grand Marshal, to the float barn director and a former Rose Queen.  Dark Fusion may be without their leader, but they are still out in full force and determined to cause chaos.  Before Britta can narrow her sights on the killer, the situation becomes volatile.  Will Portland have a Rose Festival Parade this year?

Violet Tendencies is the second novel in A Rose City Mystery series, but it can be read on its own.  Everything a reader needs to know is included in Violet Tendencies.  I like Kate Dyer-Seeley’s casual writing style.  The book contains good writing and engaging characters.  The story flows along at a gentler pace than Natural Thorn Killer.  I like the setting of Portland, Oregon (I would love to live in Pacific Northwest).   I enjoy the author’s descriptions of the city and of the Rose Festival with its variety of events.  Blooma is a unique flower shop with its European flair and a wine bar.  There are detailed descriptions on how the various flower arrangements are created along with how floats are constructed using all natural materials plus the symbolism behind each bloom.  Blooma’s float was beautifully described and it sounded enchanting.  Britta and her aunt, Elin have a close relationship at home and at work.  I like how they support each other in their professional and personal endeavors.  Elin’s boyfriend, Eric is in town and Britta finally gets to meet him.  Britta gets to spend more time with Detective Pete Fletcher.  If they could just get through one date without being interrupted.  The murder does not occur until a reader is 40% into the story.  There are multiple suspects, misdirection and good clues.  I do wish, though, that the crime had been more challenging to solve.  We get more details regarding the death of Tomo Iwamoto’s father.  Tomo would like to find who killed his father and I am curious to learn more.  Tomo and Britta have a close relationship and his mother’s noodle dishes are mouthwatering.  There are flower tips and recipes at the end of the book.  There are many delightful cozy moments in Violet Tendencies.  Violet Tendencies is set in a beautiful city, has friendly characters, an abundance of blooms and a disconcerting whodunit.

Violet Tendencies is available on Amazon, Barnes & Noble, Kobo, Google Play, and IndieBound.  The first book in A Rose City Mystery series is Natural Thorn Killer.  In honor of the tour, the author is hosting a contest.  Click here to enter or use the Rafflecopter form below.  Thank you for stopping by today.  I hope you will return next time when I feature A Season of Grace by Lauraine Snelling.  It is the third novel in Under Northern Skies series.  I hope you have a lovely day.  Take care and Happy Reading!

November 30 – Cozy Up With Kathy – REVIEW

November 30 – I'm All About Books – SPOTLIGHT