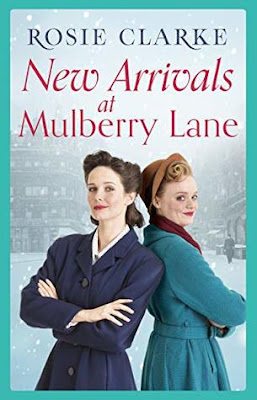 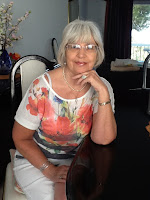 Welcome!  Rosie Clarke is the author of The Mulberry Lane Series plus Christmas is for Children, Jessie's Promise, The Runaway Wife, and The Workshop Girls series.  Rosie is happily married and lives in East Anglia.  Writing books is her passion.  When she is not creating new books for us to read, she likes to watch good films, read and enjoy holidays in the sun (who can blame her).  Rosie loves shoes and adores animals with her favorites being dogs and squirrels.  You can follow Rosie Clarke on Twitter @AnneHerries and Facebook @Rosie Clarke.

New Arrivals at Mulberry Lane by Rosie Clarke takes us back to 1944.  Rose Marchant finds herself on Mulberry Lane in London’s East End looking for a new start.  Rose has a secret that she does not want to come to light.  Rose worked at a pub back home, so she heads to The Pig & Whistle to see if they are hiring.  Peggy Ashley co-owns The Pig & Whistle with her estranged husband, Laurie who is away on war work.  Peggy can tell Rose is hiding something, but she hires her and provides her with a place to live.  Rose is enveloped into Mulberry Lane where she makes friends and meets someone special that she could imagine marrying.  But will they still like her when they find out what she is hiding?  Mabel Tandy owns the wool shop on the lane and has Ellie Morris along with her little girl living with her.  Mabel has become a mother to Ellie and grandmother to her daughter.  Ellie worries what will happen when Peter, her husband, returns home and learns that she kept the child.  Tom Barton manages the neighborhood grocery store for Maureen Hart, but he is eager to turn eighteen and join the army.  Peggy is thankful to have Rose helping in the pub and with her busy twins.  Then Laurie returns home and takes charge of The Pig & Whistle and upsets the whole household.  How will life change on Mulberry Lane now that Laurie has returned? 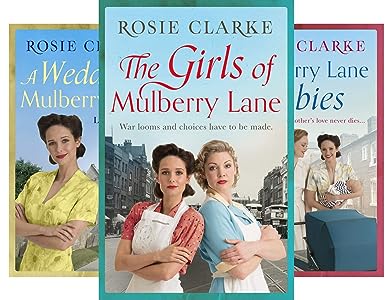 New Arrivals at Mulberry Lane is another delightful addition to The Mulberry Lane Series.  Peggy Ashley is the matriarch of Mulberry Lane and watches over the other residents.  She is friends with Maureen Hart and Anne Ross.  Peggy is known for taking in stray chicks and giving them a helping hand.  When Rose arrives, Peggy does not hesitate in offering her a job and a room.  The characters in this series are well-developed.  Rosie Clarke brings her characters to life making them realistic (characters that we love and others that we love to hate).  I look forward to each new book to see how the residents of Mulberry Lane are faring during World War II.  All of our favorite characters are back in New Arrivals at Mulberry Lane along with some unpleasant ones.  I thought New Arrivals at Mulberry Lane was well-written and engaging.  Personally, I recommend reading the books in The Mulberry Lane series in order.  Each book builds upon the previous one.  We see how the characters handle the war as it progresses.  Life continues to go one at home while the war rages on around them.  They face financial struggles, heartache, friendship, births, deaths, rationing, love, and fear.  There are twists and turns that will keep readers riveted.  Rosie Clarke captures the time period with the clothing, movies, slang, rationing, the struggles our characters face, the bombings, and the worry about loved ones off fighting the war.  I wish I could tell you more, but I do not want to spoil it for you.  I cannot wait for the next installment in The Mulberry Lane Series to find out what happens next.

Here is an excerpt from New Arrivals at Mulberry Lane your enjoyment:

Maureen Hart was amazed each time she entered the grocery shop at the end of Mulberry Lane these days. It looked so different from the way it had when she’d worked there for her late father. Married now and with a young child to care for she seldom stood behind the counter, merely taking care of the ordering of new stock. The shop was hers now since her father died more than two years earlier, and Tom Barton, her young manager, was forever doing something to brighten it up and make it look different. One shelf was currently displaying wooden toys and trinkets, a new idea that he’d had, and she’d given him the authority to go ahead with. Ben Walker, a soldier who had been wounded and forced to retire from the Army early in the war, made the toys. His spine had been damaged and he needed a wheelchair to get around because he couldn’t walk far, though he was able to walk a little and to look after himself. Unable to find the kind of work he’d done before the war, he’d used the skill in his hands to make toys from reclaimed wood he sourced in the junkyard. He’d come in for some cigarettes one day and shown Tom some of his toys. Impressed by the brightness and colour of some wooden bricks, the beautiful animal carvings, and the natural beauty of the wood in other pieces, Tom had asked if he could keep some pieces to show Maureen and he’d come up with his idea to sell them for the ex-soldier, taking a fifteen percent commission.

‘We might not sell many most of the year, but there are birthdays and at Christmas it should prove worthwhile; besides, it would help to fill an empty shelf.’

Since Tom’s industry had cleared the backlog of tins and stock from the back room, there were unavoidably large spaces on the shelves as the war wearied on and shortages got worse. His new idea had filled a shelf and because there were wooden love spoons, trinket boxes, ashtrays and breadboards as well as the toys, they managed to sell a few items most weeks, and had done quite well the previous Christmas. Those sales hadn’t made much difference to the shop’s profits, but it helped the soldier and brought more passing trade, as toys were as difficult to find as anything else these days and Maureen had told Tom to buy more. Ben could only manage to make a few in a week and Maureen had told him that she would buy from him all the year so that he could earn a regular living.

Despite all the hardships, the year of 1943 had been relatively peaceful for the inhabitants of Mulberry Lane compared to the months that had preceded it. Now they were in January 1944. Peggy’s twins, two months older than Maureen’s son, were doing well, into mischief and running around until they tired themselves, and Ellie Morris, the young woman who worked for the hairdresser in the lane, now had a darling little girl named Beth with blonde hair and blue eyes. Her husband Peter was in the Army, but Ellie seemed happy living with Mrs Tandy, above the wool shop next door to her work.

Maureen’s own son Robin was thriving and completely spoiled, because, between them, Gran and, her husband’s daughter, Shirley, made certain he was never allowed to lie in his cot and cry. All he had to do was to yell and one of his ardent admirers would have him out of there and onto their lap. Maureen had given up trying to forbid it, because Gran refused to listen.

‘Crying isn’t good for babies,’ she’d told Maureen in no uncertain terms when she’d said it would spoil him to pick him up every time he cried. ‘It means he’s wet, hungry or has the tummy ache and deserves attention.’
Of course, Robin was growing fast now, no longer a tiny baby but an unsteady toddler. His first words had been Dadda, Shirl… and then Mumma. Maureen had repeatedly told him about his daddy from the moment she held him in her arms, explaining that his daddy was a soldier. When Gordon had come home for a two-month posting and new training in late October 1943, Maureen had shed tears as she watched them together; because from the love and the pride in her husband’s face, she believed her own fairy tale that Robin was indeed Gordon’s son. Her belief in the myth had grown, because despite Rory Mackness’ threats when she was in hospital just after Robin’s birth that he intended to visit his son whenever he chose, he had not been to see her or his son since that day in 1942 and she could only hope it stayed that way.

‘He’s a beautiful child, Maureen,’ Gordon told her when they made love the night before he was due to return to his regiment prior to his next posting. He’d finished his tour of duty in the desert before his leave and wasn’t sure where his next posting might be after some further intensive training in the south of England. ‘It was kind of you to let Shirley name him – and Robin suits him beautifully. He is intelligent and bright as a little bird.’

Gordon had changed so much since he’d joined the Army. He was stronger, fitter and far more confident than the man who had used to buy barley sugar for Shirley from Henry Jackson’s shop. The days when she’d worked in her father’s grocery business seemed far off now to Maureen. She’d trained as a nurse at the start of the war before falling for a child with a man who had let her down too many times, and then returning to the lane. Gordon had confessed his love and offered her marriage, even though she was carrying another man’s child. He’d shown her what love really meant and she was so grateful that he’d loved her despite everything.
‘It made her happy,’ Maureen said, ‘but I’ve realised it is perfect for him. We’ll keep your name for our next son…’

Gordon had kissed her again, stroking the silken arch of her back. ‘We might have a girl…’ he said, but she’d shook her head and pressed against him, savouring every moment of their short time together.  ‘We’ll have another boy. Shirley doesn’t want a baby girl in the family.’ 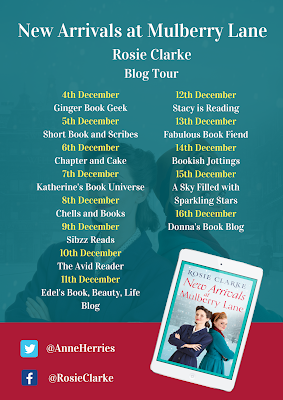