The Fallen Women by Lindsey Hutchinson 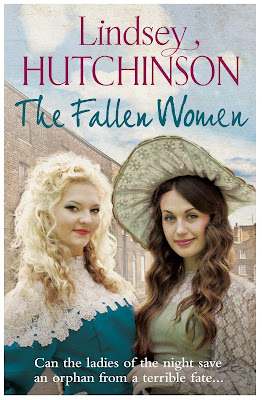 Hello!  Lindsey Hutchinson lives in Shropshire with her husband and dog.  She loves to read and recently discovered photography.  Lindsey is the daughter of bestselling author, Meg Hutchinson.  Readers can find Ms. Hutchinson on Twitter (@LHutchAuthor) and Facebook.  Lindsey has written The Girl on the Doorstep, The Wives Revenge, The Workhouse Children, The Orphan Girl, and The Lost Sisters.  All the books are part of The Black Country Novels.

The Fallen Women by Lindsey Hutchinson has readers journeying to Wednesbury in England’s Black Country.  Ann Felton has been on her own since she was thirteen.  She lived on the streets, but she attended school each day until she turned fifteen.  For the last three years, Ann has been working as a kitchen maid at Bell Inn, the local pub, where she also resides.  Len and Gladys Pritchard own the public house, and they created a room called the snug where the local ladies of the evening can relax and enjoy a pint.  Those women are Ann’s friends, and they look out for each other.  One evening, Ann is out for a walk near the Theatre Royal when she sees Victoria Beckett having a temper tantrum.  Ann suggests that her father give her a good spanking which Lord Richard Wyndham finds amusing, but it infuriates Victoria.  This one incident is the spark that will ignite the flame that changes the lives of Richard, Victoria and Ann along with her friends.  Then someone starts killing the local prostitutes and Ann is worried about her friends’ lives.  Who is behind these vicious attacks? 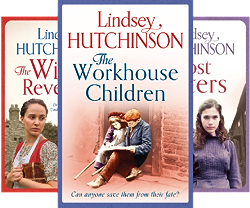 I enjoyed reading The Fallen Women.  I like the author’s writing style which drew me into the story.  She created characters that I liked, and that I was rooting for them to succeed.  There are other characters that are the type that readers love to dislike.  Ann Felton has worked hard to stay off the streets and earn a respectful living.  She wants to help her friends improve their lives and find a different way to earn their money.  Ann is a hard worker with a realistic view of life and she has a large, loving heart.  I like the strong and colorful female characters (except Victoria) in the book.  There is mystery and suspense in The Fallen Women.  I like how they add depth to the story and provide shocking twists along with revelations.  One woman is bent on revenge and there is a Jack the Ripper type killer in their small city.  I like the romance between the unlikely pair of Lord Richard Wyndham and Ann Felton.  There is humor sprinkled throughout the story especially when the ladies get together for a pint.  There are some historical inaccuracies in The Fallen Women, and I felt the book could have been shortened (just a wee bit too long).  I am giving The Fallen Women 4 out of 5 stars (I liked it).  The Fallen Women is a multi-faceted story where the author combined romance, strong women, friendships, humor, intrigue, hard work, and a mystery into one engaging story.

Here is an excerpt from The Fallen Women:

Victoria Beckett, the girl with a temper like a tornado, had been named after the reigning Queen in an effort to raise her family’s status in the small town of Wednesbury. She was, however, a brat of the first order, and everyone knew it. All of her eighteen years had been spent demanding this, that and the third thing from her parents. Her mother, Ariadne, had given in to her daughter’s every whim, whilst her father despaired.

William Beckett was the manager of the London City and Midland Bank, which sat in the marketplace and was where he spent many long hours. His wife filled her time shopping and socialising in the desperate hope of finding a suitable husband for their daughter.

The Becketts lived in what Ariadne might term a mansion at the top of Spring Head, the street leading away from the marketplace. ‘The Beeches’ had four bedrooms, a parlour, living room, kitchen, scullery and stables, and servants’ quarters as well as an indoor lavatory. Very few properties enjoyed this luxury – most having their privies in a separate building in the yard – so in this Victorian age it was indeed a sign of wealth.

Queen Victoria had reigned for sixty-one years and was adored by her subjects, so much so that when her husband Prince Albert died in 1861, the whole country mourned his loss alongside her. The Queen was in her dotage now and the people guessed it would not be long before her son Edward VII would accede the throne.

However, her namesake cared nothing for royalty. Victoria Beckett cared only for herself and what she could get out of her parents.  Dressing for breakfast, Victoria relived the day of the Mayor’s ball, when she and her mother had climbed into the cab snapping out the names of the shops they wished to visit. The cab driver had rolled his eyes as he turned the horse in the direction they were to travel.

Although The Beeches was not far from the marketplace, Ariadne could not be seen to be walking; only the poor walked to their destinations. As the carriage had rumbled over the cobblestones of Spring Head, the summer sunshine poured in through its windows. The heat began to make Victoria testy and she had banged on the ceiling of the cab with her parasol yelling for the cabbie to get a move on.

The driver had ignored her call, for as they approached the intersection with Ridding Lane, the carriage had stopped. Taking his time, he’d looked both ways for any other forms of traffic or people crossing and, deciding this would be a good time to light his pipe, he took out his tobacco pouch. Filling his pipe, he struck a match and, cupping it with his hand, he held it to the pipe bowl, drawing hard on its stem.

Victoria had wrinkled her nose as she smelled the smoke from the pipe.  Disgusting habit!

Another bang of the parasol had told him his passengers were now very irritable. With his pipe clenched between his teeth, he retrieved the horse’s reins. Checking again that the way was clear, he snapped the reins together with a loud crack. The horse shot forward, dragging the carriage behind it and sending the women inside sprawling on their seats. The first port of call for mother and daughter had been ‘Broadhouse Gowns’.

The Misses Broadhouse, identical twins, ran their dress shop in the marketplace and were renowned for their quirky ways. Never could a conversation be had without one finishing the other’s sentence. For all that, they were the finest dressmakers in the town and commanded custom from the wealthiest families.


Flora and Laura Broadhouse had welcomed Victoria and her mother into the shop.

‘Welcome, it’s nice to…’ Flora began. ‘… see you,’ Laura finished. Victoria had tutted loudly, rolling her eyes at the women’s odd mode of speech. ‘Is my ball gown ready?’ she demanded to know. ‘Just as…’ Laura began. ‘… you ordered,’ Flora ended. ‘Well?’ Victoria had glared at the twins.

Rushing into the back room, they had soon reappeared with a striking scarlet gown, and snatching the dress, Victoria had quickly retired to try it on. With a sweetheart neckline cut low, it had capped sleeves and was nipped tightly in at the waistline. The voluminous skirt swelled out, the hemline sitting perfectly on top of the girl’s feet. Swishing through to parade before her mother, Victoria had turned around, looking at herself from all angles in the long free-standing mirror. Victoria was delighted.

‘I’m really not sure about the colour, dear,’ Ariadne had said.  ‘Oh, Mother! I don’t want to be lost among the white dresses of the other girls at the ball!’ her daughter had huffed.  ‘Well, in that gown you certainly won’t be!’ Turning to the Misses Broadhouse, Victoria had snapped, ‘Wrap it, box it and send the bill to Daddy!’ Walking into the back room to disrobe, she had left her mother shaking her head.

In the carriage once more, the women had headed next to collect Victoria’s red shoes in Upper High Street. Then it was on to the hotel at the end of Albert Street. Everyone who was anyone took lunch in the Albert Hotel’s fine dining room. Victoria thought it an excellent place to show off the boxes that held her dress and shoes, flatly refusing to leave them in the cab whilst they ate. She wanted all to be aware of where the women had shopped that morning.

Waltzing into the dining room, Victoria had ignored the maître d’ and marched to the table in the centre of the room. She wanted to be seen and she’d chosen the perfect spot. A waiter appeared in an instant, clutching a menu, with the wine waiter at his heels. All conversation at surrounding tables had ceased as the Becketts entered the room, and as Victoria cast her eyes around, the mutterings began once more. She smiled, they had all seen her enter and were now trying to ignore her. She knew they had spied her purchases and she felt jubilant as she sat her with nose in the air.

Voices at the doorway drew every pair of eyes as the maître d’ began apologising to the handsome young man by his side. Waving the apology away, the man sat at the table next to the Becketts. As the man scanned the menu, Victoria called over the maître d’ with a click of her fingers.  ‘What is all the disturbance about?’ she asked harshly. ‘I’m afraid the gentleman’s table was taken by someone else, madam,’ the man said.  ‘Oh, by whom?’ Victoria asked.  ‘By you – madam!’ Turning on his heel, the maître d’ had stalked away. Victoria had noticed the young man at the next table raise his menu, and she thought it had been to hide his smirk. 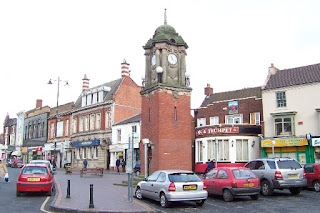 Are you intrigued?  Above is a picture of Wednesbury as it looks today. The Fallen Women can be purchased at Amazon, Kobo, Google Play and iBooks.  I hope you will take a moment to visit the other stops on The Fallen Women Blog Tour (see poster below).  I appreciate you visiting today.  I hope you will return tomorrow when I feature One Taste Too Many by Debra H. Goldstein.  The first book in A Sarah Blair Mystery series which comes out on December 18.  May you have a delightful day.  Take care, stay warm and Happy Reading! 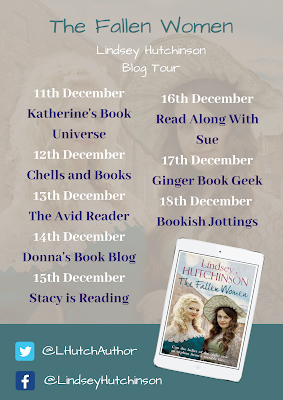